Policeman in Uniform Washing Davido’s Car in His Compound 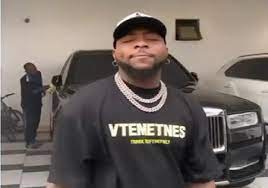 Should this be hilarious?  It is rather amazing! An officer of the Nigeria Police Force has been captured on tape washing ace singer, Davido’s recently acquired Rolls Royce Cullinan.
He was spotted in a video Davido posted online to announce that he would be at a particular night on Wednesday night.

Davido was talking about him showing up at the club whilst the officer who was in a police cardigan usually worn while working as security for high-profile individuals and celebrities, was spotted washing the N200 million Rolls Royce parked behind the singer.
The video has sparked reactions from citizens as they expressed shock at what money can do in Nigeria