I ‘ve ‘Quit’ From Impregnating Women-2Baba 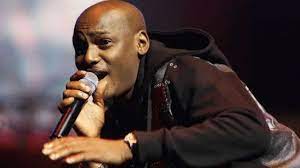 Tuface said this while performing one of his hit songs, True Love, during the Idoma carnival  in Benue State, asking his audience repeatedly ‘’where is my true love?’’

Low response from them, prompted him to make the statement.

He said in Pidgin,’’ I see say some babe dey fear to shout for that side.  A beg, make una no fear to shout, I no dey give bele like that again, I don stop. Ask anybody, they will tell you  I am  Innocent  Idibia. I no dey do that kind thing again. No, be small thing, I don resign for that  kind matter’’.(sic)

At present Tuface has seven children, his previous relationship with his baby mama Pero had produced three children, with Sumbo Adeoye the singer has two children.

Tuface is married to a Nigerian Actress, Annie and the union has produced two children.