Flag Off Of Ultra- Modern Olaiya Fly-Over Bridge in Osogbo

The official flag-off of the Ola-Iya flyover Bridge, the first of its kind in Osun State took place yesterday at the Olaiya junction axis in Osogbo, the capital city of Osun State.

The interviewsNigeria went around the vicinity and chatted with one of the site engineers Mr. Jonah who said that the project is laudable and well thought of, which our construction company is ready to commence work immediately. According to the engineer, ‘’’ all equipment is on the ground and installation will commence non-stop and hopefully, the project will last between 8 to 9 months’’.

While delivering his welcome address, the Commissioner for Works and Transport, Engineer  Remi Omowaiye posits that work on the fly-over bridge will commence immediately and will not stretch the lean purse of the State government because ‘’it is a collaborated effort’’. He said the fly-over was conceptualized as part of the efforts to reduce traffic, reduce the rate of accidents at the axis and advance infrastructural development of the state.

In his speech, Mr. Abel  O. Adeleke, Managing Director of Peculiar Ultimate Concerns Limited, the sole contractor for the project gave his word to do a quality service that posterity will emulate.

‘’ We are operating in Osun on the premise of integrity and this project will be executed in such a way that will not impact negatively on the debt profile of the state.’’ ‘’We are glad to have this opportunity and I assure you that we will deliver the project within the stipulated time and there will be no excuses, come rain or sunshine’’, he concluded.

In his own address to the people at the occasion, Governor Oyetola said, ‘’ now there are an increase in business activities and the population growth in the city requires improved infrastructures. The implication of the fly-over, therefore, is the growing traffic around major routes in the city  most especially at the Olaiya junction axis resulting to waste of man-hours by residents in the state.’’Sadly too, there have been numerous cases of accidents of commuters’’. ‘’I have personally witnessed few of these unfortunate incidents and cannot afford to waste more lives’’. He then appealed especially, to the traders around the axis of government’s understanding of their means of livelihood and admonished them ‘’to bear with us, as we will try as much as we can to minimize inconvenience’’. 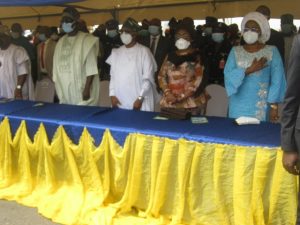 Governor Oyetola said the fly-over bridge is designed to accommodate articulated vehicles with better attractive and durable light devices with efficient and effective traffic control devices. He disclosed that the project would cost the state a total sum of Three  Billion, One Hundred and Eight Million, Three Hundred and Twenty-Nine Naira, Seventy-six Kobo.(#3,108,379,#2685,748,552.74 and 13.5 % statutory deductions which include the percentage withholding tax,7.5 percent value Added Tax and 1% stamp duty deduction..

Governor Oyetola disclosed that the project would be funded through the Alternative  Project Funding Approach(APFA).The Governor mentioned that‘’ the APFA connotes that the contractor will fund the project, while the state re[pays the contractor over a period of time so as to enable the government to be able to pursue another vital project for the people in the state.

The Ataoja of Oshogbo, Oba Jimoh Olanipekun commended Oyetola for this breakthrough project as it will impact positively on the welfare of the people and also complement the existing road infrastructures in the city. 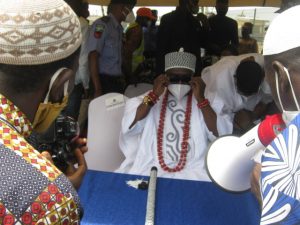 The fly-over is designed with a 4-5 span of 15 m each with two underpass bays for U-turning to Fakunle/Justrite and MDS/NIPOST Office. It will be a 295.95m length of bridge Approach Ramp, 196m long Fakunle Ramp,99.95m long MDS Ramp with a slope of Ramp being 3%

It should be recollected that the Oyetola administration had earlier announces its decision to construct a flyover bridge at the Oliya axis in Osogbo to salvage the unwarranted accidents and serious traffic jams at the intersection. As a move to achieve that a three-hour demo closure was effected on Friday as part of the prelude construction attempt.