YAHOO-YAHOO: Boy Tries to Pluck out Mother’s Eyes for Ritual 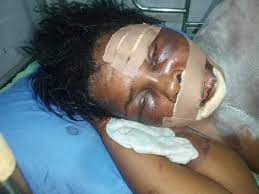 Emmanuel  Ereegarnoma has allegedly tried to pluck out his mother’s eyes for the ritual to buy a Benz in Delta State.

It was reported that the incident happened about 8 pm on Monday,14th September 2021 at the Okuokoko residence where Emmanuel lives.

Reports had it that the suspect invited his mother to his house for a ‘surprise’ and the mother went unsuspectingly of his son’s evil intention.

The mother, a petty trader went to her son’s house and met his son in an elated mood playing loud music in the living room.  After welcoming her mother,  locked the door and after a while, started to strangle her. The mother’s cries for help were submerged in the loud music blasting from the loudspeakers.

Notwithstanding, the mother used her last breath to break free and ran violently outside where the neighbours rescued her, apprehended the boy and handed him to the police at the Okuokoko police station.

A source, Joseph Adkjari, privy  to the incident wrote:

‘’Mrs. Oke  Ereeganoma who is from Edurubo in Ugheli North Local Government but resides in Okuokoko and sells foodstuffs at Okuokoko market beside the Okuokoko police Station has survived  a ritualist attack by her son.’’

According to him, the son for some time before he was apprehended, has been boasting that he must drive a GLK this week, so, on Monday 14th, at about 8 pm, the son invited the mother to his house at Caroline  Street  Okuokoko that she had a surprise for her.

On getting to his son’s house, the mother met his son in a joyous mood with loud music blaring. The son locked the door, trying to strangle the mother to death by trying to pluck her eyes; she started screaming for help, but because of the loud music that was blaring in the background there was no help in sight but suddenly strength came upon her, ran outside shouting for help where neighbours came to her rescue, while the son was caught and handed over to the police at the  Okuokoko police Station.

Mrs Oke is now receiving treatment in a hospital in Okuokoko.