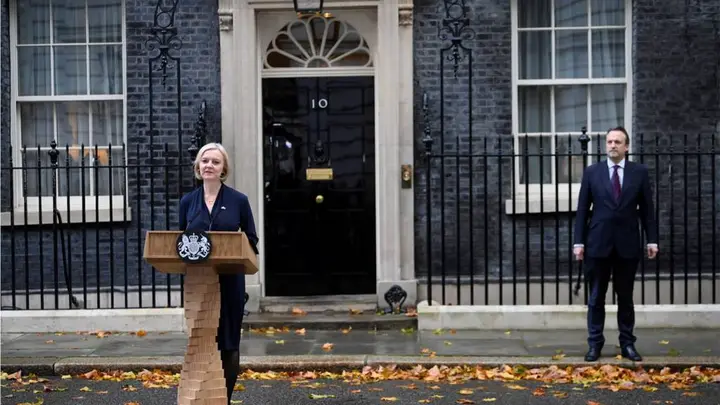 It is no longer news that  Prime Minister Truss  has resigned her appointment.

Recall that ‘The Interviews Nigeria’ reported of Liz Truss resignation  but  the  report was sketchy at the time of going to the press.

It has however , been established now ,In a statement made outside Downing  Street,  where Truss said, she could  not deliver the mandate  on which she  was elected  as Tory Leader  and had notified  the King  that she was resigning.

‘’There will be  Conservative  Leadership  Election    to be completed within  the next week’’, she said.

‘’I will remain  as Prime Minister until a successor  has been chosen, ‘’ she echoed.

This  came after  she met  the chairman  of the 1922 Committee of Backbench MPs as more Tories  called  for her to quit.

Truss’s premiership came under renewed  pressure after the home secretary  resigned  and a chaotic  vote on Fracking.

There  was  fury on Wednesday  evening  around  the vote  and the methods used  to get MPs to vote with the government.