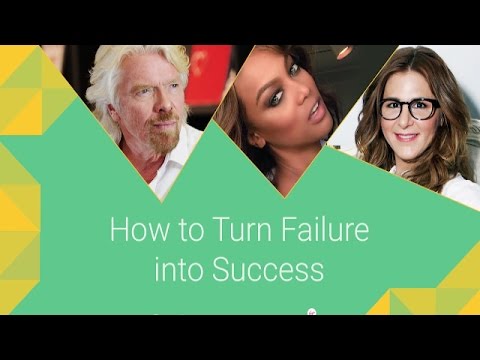 Failure is inevitable in life. Failure in business is even more certain. Everyone who has dared to make a difference in business has had a share of failures. Everyone who has started and built a business must surely have a story to share on failure. Those who have never failed have never really tried enough. Some of the highly successful businesses of the world today have come very close to folding up. They only gathered momentum once more and dared again. Failure is not the worst thing that can happen to a person; never trying anything is worse than trying and failing. Listing below is some of the greatest entrepreneurs of our time and what they had to say about failure, which will help renew our mentality towards failure.

Gates has been the richest man in the world over many years. However, he has not succeeded in everything he did. He dropped out of Harvard Business College without finishing and went into I.T. He later co-founded Microsoft that eventually made him the richest man in the world. However, before starting Microsoft, he started a business called Traf-O-Data that failed. At the time when he dropped out of school and when he failed in his first business venture, many would have considered him a big failure but today, he is worth over $72 billion and making more daily. Because he chose not to give up, no one remembers his failures as much as his successes.

His words: “It is fine to celebrate success but it is more important to heed the lessons of failure. I failed in some subjects in exams; but my friends passed in all. Now he is an engineer in Microsoft and Iam the owner.

Ford was an American industrialist, a machinist and manufacturer and founder of Ford Motor Company. Before achieving success, he failed twice when he joined with investors to establish a company that would manufacture automobiles. His Detroit Automobile Company and Henry Ford Corporation folded up only after a year of existence because the automobiles they were producing were of a lower quality and higher price than what he wanted. He tried race car, but realized the average man did not want race car, but something more reliable. It was his desire to make that led to the Ford Motor Company that succeeded and sold its first car for about $800 on July 15, 1903. He became one of the richest men in the world in his days and even today. His words: ‘’Failure is just a resting place. It is simply the opportunity to begin again, this time more intelligently. The only real mistake is the one from which we learn nothing’’.

STEVE JOBS -Late Steve Jobs was an American entrepreneur, marketer and inventor, co-founder, chairman and CEO of Apple. Jobs like every other successful entrepreneur were not immune to failure. In 1985, he left Apple after a power struggle with the board of directors but returned in 1998 and brought Apple from near bankruptcy to profitability. This may make him look like a superman but he too had business failures. A notable one was with products like The Apple Lisa, The Apple 111, The Powermac g4 cube which all failed. Also when he tried to sell Pixar by late 1980’s in order to break even on his investment

Even on his investment, for 4 to 5 years he had no bidder. He shopped it to Bill Gates, Larry Ellison and many other companies but did not succeed. At last, he succeeded to sell it to Disney in 2006 for $7.4billion. Most certainly today, no one at Apple remembers his failures.

His words:’’ I am convinced that about half of what separates the successful entrepreneurs from the non-successful ones is pure perseverance. If I try my best and fail, well I have tried my best’’.

Sir Branson is a British business magnate and inventor. He is the founder of the Virgin Group that currently owns more than 400 companies including Virgin Records, Virgin Airways Virgin Mobile, etc. If there is one man who better understands business failure, it is Branson. He has failed in several business projects since he started the Virgin Group. Some of them include: Virgin Cola, Virgin Student, Virgin Brides, Virgin Clothing, Virgin Cars, Virgin Megastore, Virgin Flowers Virgin Pulse and Virgin Digital, and more. Some lasted a few years while others failed just immediately they started. But inspired by the lesson his mother taught him never to focus on past regrets, he refused to stop and today Forbe’s magazine ranks him as the 6th richest citizen of the United Kingdom with a net worth of more than $4.6 billion.

His words:’’ You don’t learn to walk by following rules. You learn by doing, and by falling over. I see life almost like on a long university education that I never had-every day I ‘m learning something new’’.

Winfrey is an entertainment guru and one of the richest black women in the world. She was terminated from her post as co-anchor for the 6 O’clock week day news on Baltimore’s WJZ-TV after the show and received low ratings. She was demoted to morning TV, where she found her voice and met fellow newbie Gayle King, who became her producer and editor of O, The Oprah Magazine. Seven years later she moved to Chicago, where her self-titled talk show went on to dominate daytime TV for 25 years. She now heads her own channel, OWN, but had to overcome failure, poverty, sexual abuse, etc. in order to be what she is today. Today her net worth is about $2.9 billion.

Her words:’’ Be the one to thing you think you cannot do. Fail at it. Try again. D better the second time. The only people who never tumble are those who never mount the high wire. This is your moment, own it. I don’t believe in failure. It’s not failure if you enjoyed the process’’.

Joanne Rowling is a British novelist and author of the Harry Porter fantasy series. She wrote her first book, Harry Potter and the Philosophers’ Stone when she was a single mother. She was rejected by 12 publishers but she persisted on what she was doing until the Harry Porter series grew, ultimately breaking records. She is now internationally renowned for her seven-book, Harry Potter series and became the first billionaire author in 2014.

Her words: ‘’It is impossible to live without failing at something , unless you live so cautiously that you might as well not have lived at all- in which case, you fail by default. Failure is so important. We speak about success all the time. It is the ability to resist failure or use failure that often leads to greater success. I’ve met people who don’t want to try for fear of failing’’.

Culled from the Vanguard.

Zenith Bank Refunds N3.3M to a Customer Whose money N4.039 Suddenly Disappeared in Her Bank Account