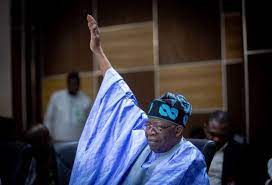 The former Lagos State Governor  Asiwaju Bola Ahmed Tinubu has been announced as the winner of the All Progressives Congress,(APC)  Presidential primary election held at the Eagles Square, in Abuja yesterday the 7th of June, 2022.

The National leader of the All Progressives Congress  Ahmed Bola Tinubu polled a total of  1,271 votes to beat his closest rival, former  Transportation Minister, Rotimi Amaechi who was next to him with 316 votes.

The vice-President, Yemi Osinbajo  came third  with a 236 votes

Breakdown of  Results as follows:

Recall that about seven aspirants including the Governor of Ekiti State, who also is the Chairman of the Nigerian Governors Forum, Kayode Fayemi, Godswwill Akpabio, former NDC Chairman, former Governor of Ogun State, Ibikunle Amosun, Dimeji Bankole former House of Representatives leader among others had earlier stepped down for  Bola Ahmed Tinubu the Asiwaju of Lagos.

With this victorious outing,  Tinubu  has become the flagbearer of the APC  in the coming 2023 presidential election to face his  major opponent Atiku Abubakar of the Peoples Democratic Party((PDP)