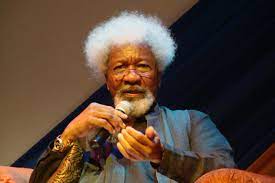 The Nobel Laureate Pro. Wole Soyinka  has condemned  the agitations against  the appointment of  Prof.  Adebayo  Bamire  as the Vice-Chancellor  of Obafemi  Awolowo  University(OAU)

Traditionalists on Monday had protested on campus, saying Bamire was not an indigene of Ile-Ife.

At a lecture titled Politics of Black Intellection and Creativity ‘ at the University of Pennsylvania, United States on Tuesday, Soyinka said there was no basis for such protest.

‘’Why should there be an Ife VC anywhere? He asked.  ‘’An Ife person wrote me and said,’’ Look at these people disgracing us’’. I told him,’ Go there and disgrace them.  You are an Ife person. You should  be in the frontline.’’

‘’The Ife people should say those people don’t belong to us, e don’t know where they came from. And they should be dealt with ruthlessly. I just don’t understand what they put in the water these days. It is crazy,’’ Soyinka added.

The literature and playwright guru  also  delved into the insecurity in Nigeria.’’I  stated one time that anytime anybody is kidnapped in any State, let us shut down that State immediately until that person is recovered. It has reached that point, that abnormal measures are absolutely imperative. It is no longer a choice. And yet, the government continues to roll on,’’ he said.