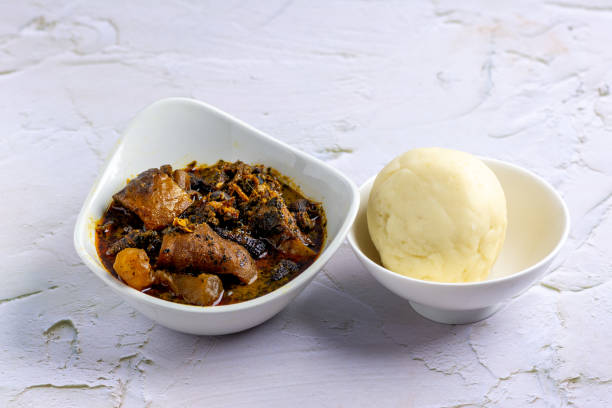 ………. *FUFU* processed from Cassava stuff, which used to serve as staple food for most homes in Nigeria today *is becoming a silent killer due to unhealthy practices arising from attempt to cut corners and make more profit.*
To get more facts, this repor0ter went to town and visited the popular Fufu market at *Oke- Lisa Street adjacent A-Division in Akure, Ondo State* very early in the morning, pretending to be a cassava producer who needs more information on the processing steps.
She interacted with those who brought the already prepared Fufu into the market and explained that she ran into huge loss in her first attempt because she was not well informed on what to do to make the processed cassava rise and that she did not want the same story to repeat itself the second time.

One of the women then educated the reporter that after sieving the cassava into big plastic container, she should put *Jatropha Curcas leaves (EWE LAPALAPA)* on it and leave it for days to rise.

The Reporter then told the woman that she added the leaves the first time but yielded no result.

The Reporter was then told that *if she could add DETERGENT or HYPO* it will hasten the fermentation process but that she needed direction on when to use it and the quantity to be used.

Immediately this reporter said this, one of the women reacted that they were not using HYPO or DETERGENT for fermentation and she left in annoyance *but the second woman opened up and said that they use them.*

The reporter asked if there was no other way of making cassava to rise aside adding HARMFUL CHEMICALS and the woman said, “This has been the practice among Fufu producers and there is no quicker way to achieve softening and unusual rise of soaked cassava without adding those CHEMICALS.

Cassava processors from *Ilu -Abo, Owode, Ogbese, Igbara -Oke, Igbara -Odo, Ifaki -Ekiti and environs* who bring them to sell in this market all indulge in the act of adding CHEMICALS to soak cassava for FERMENTATION”

When told that using chemicals to quicken Fufu processing could cause TERMINAL DISEASE for consumers, in defense she said,” CHEMICALS are also used to plant different vegetables and to force fruits to ripe, so adding CHEMICALS to what we consume is not peculiar to Fufu alone and nobody can discover the secret of improving his/her business without keying into it.

They also add chemicals to ferment cassava in other states in fact, all states are guilty of this.”

This reporter then visited *Owode in Oba-Ile* and met some of the cassava processors in various open processing centres but none of them was ready to answer any question on how they go about the processing.

This led the reporter to visit some people around the area who also declined comments.

Then, a man who was sighted around the area was approached though, reluctant initially to attend to the reporter but when told that it was a project work on what to do for processed cassava to rise and ferment quickly, he agreed to cooperate as he divulged the secret.

Taju as he was called claimed not to be living at Owode but goes there whenever he has job to do in the area being an artisan revealed that a lot happened during the processing of cassava into Fufu which according to him is harmful to human health.

*”Aside the obvious that the environment for cassava processing is always dirty, the processors add potash to cassava during processing to make it rise and ferment” he stated further.*

On if every cassava processor does it, *he said that 95 per cent of them engage in it to make more gains.*

“What they do is that when it is dark, they get hypo, some use detergents or potash and add it to sieved cassava in the plastic, they will leave it for days when they fell it is okay by their own terms then, the detergents, hypo and potash would have mixed with the cassava they then take it to different markets to sell where those who turn it into Fufu will buy.

*Some of them (Cassava processors) wake up early in the morning to perpetrate the evil act so that they will not be seen by anybody.*
*That has been the practice around.*

Go to *Ogbese, Oba-Ile, Igbara-Oke* and other areas they are processing cassava, they add harmful chemicals to it in order to make more profits not minding the risk such chemicals pose to consumers’ health.

*The reason for this is because people want to survive anyhow and I think it is high time our government addressed this to save innocent people from untimely death.*

In the submission of a Fufu seller at Oba -Ile who simply gave her name as Blessing, she revealed to this reporter that those who engage in such act are the local cassava processors from different villages in the Akure suburbs who later sell to those who will turn the already processed cassava into Fufu for consumption.

*“There was a day my mother bought processed cassava in the market but as the woman was turning the cassava into my mother’s sack, my mother perceived hypo smell in it and she immediately challenged the woman of adding chemical into the cassava though, she denied but my mother proved it to her before collecting her money back.”*

On how they came about the deadly idea, she said, “I cannot say but I think it started in Ondo state two years ago when sellers from other states introduced the idea to them because I heard that some of them contacted cassava processors in *Lagos, Ogun, Edo, Osun, Delta and other states* for the idea and the reason for this dangerous development is to make abnormal profits at the detriment of consumers’ health because the more the cassava rises, the more the gain they make.

*The only way to avoid being a victim is for consumers to make Fufu themselves or sniff any Fufu before they buy to be sure of the odour.”*

Another Fufu seller, in her mid 60s who simply want to be called Mama when asked if she was aware of poisonous Fufu in circulation explained that she was not aware and that she has never bought such Fufu since she ventured into the business because she always perceive the odour of any processed cassava before paying for it.

“I sniff any processed cassava before making the payment, and any one with different normal odour expected from cassava will not be bought because I also eat out of it including my children and grandchildren” she said.

This Reporter further spoke with a nutritionist in *Ondo State Mother and Child Hospital Akure,* Mrs Aduni Adekolurejo who condemned the act of making money at the detriment of peoples’ lives.

*She traced consumption of Fufu mixed with hypo, detergents or potash to series of increase terminal diseases around.*

“This development is not only scary but worrisome. How can people be so wicked to the extent of mixing chemicals with cassava?
No wonder the causes of most diseases are unknown.

*Many patients could not even explain how they became victims of some ailments after being diagnosed because they do not have the history of such in their families.*

It is better we raise the alarm so that people will be careful of what they consume.
There should be
a public awareness regarding this killer Fufu for people to be cautious.”

*Share to all your contacts to save lives from this SLOW KILLER POISON “FOOD” !!*