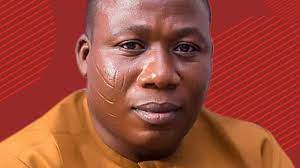 Sunday Adeyemo, aka Sunday Igboho, has lent his voice to condemn the barbaric attack on innocent worshippers at Francis Catholic Church, Owo, Ondo State that left the gory tale of sorrow, tears, and blood with over 50 dead and scores injured last Sunday.

It was reported by this medium that a yet to be identified gunmen abruptly intruded into the Sunday Service at Francis Catholic Church, Owo shooting worshippers and also used improvised explosives to destabilize the congregation.

While reacting to this gory incident, Sunday Igboho in viral audio released and obtained by  The Nation said:’’ I pray to God that we don’t experience such again. I pray to God to comfort the families of the victims.

‘’My fathers and mothers, can you see that I have been vindicated? I was not in a battle with any Governor or Senator. But what  I envisaged, you didn’t see it. Now, can you all see?

‘’Many were saying I wanted to create crises and foment trouble, but can you all see it now?

‘’Well, the situation can still be redeemed. I want  Yoruba people to be united before it is too late.

‘’I want the South-West leaders to support me and other courageous  Yoruba sons and daughters so that we can guard against these wicked acts’’.