Osun Constabularies Protests: They are not Employed to be Paid by the Government-Osun Police Command 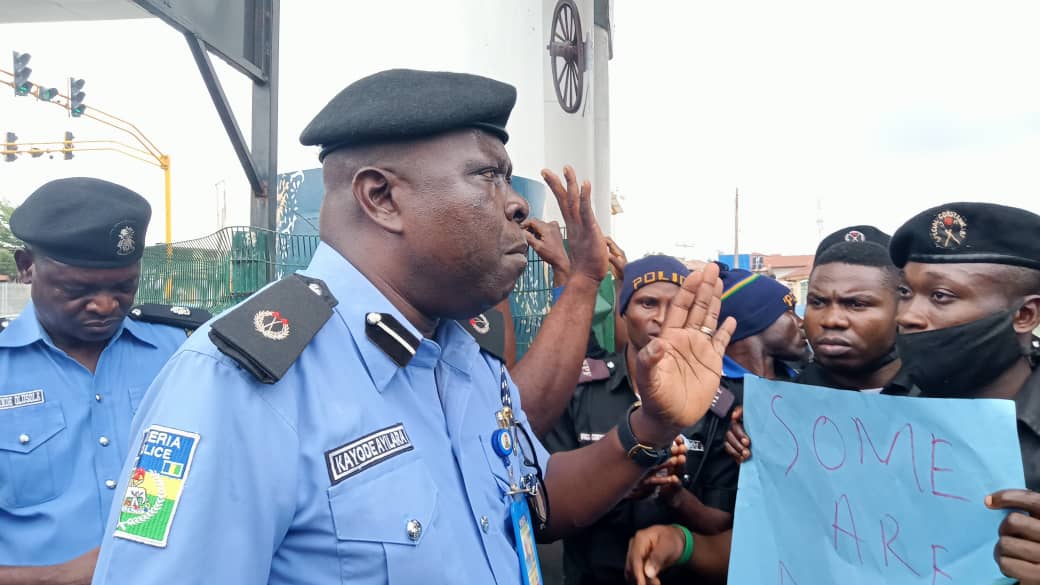 The Osun State Police Command has thrown a light on the Wednesday protests of the Constabularies in Osun State capital, Osogbo saying they were giving the public wrong impressions as if they are on paid employment .

The Spokesperson of the Police ,Yemisi Opalola in her statement in response to a question thrown to her on the Rave FM Radio Yoruba Programme”Igbimo Ajoro”(the Parliament), as monitored by The Interviews Nigeria said that the Constabulary Scheme is a voluntary service.

“They are not police,even the ceremonial uniform they wear is not to be put on anyhow”. They are not trained to hold guns and their training was only for a month which was not supposed to be so if they are real policemen”

According to Police PRO,the Constabularies were employed to supply the police information at the Local and State levels”she said.

Also,Opalola said,”before they were recruited,their names were recommended and submitted by the local and State governments.”

“The Community Policing Constabulary Scheme of the Force is purely voluntary Service which is the Federal Government initiative to improve security at the grassroots through training and incorporate individuals with prior paid  employmen who desire to spend their spare time assisting the police in it’s task within their various communities”,Opalola echoed.

Earlier,the Commissioner of Police, Osun State Command,CP Olawale Olokode,PSC, still re-emphasised the  fact that,the scheme is voluntary and no payments were agreed with the  individuals under the scheme,neither were paid terms of  appointment discussed prior to its commencement.

However,”the State Government,or local government where they  are serving may decide to give stipends to the members of  the Special Constabularies recruited  by them for this assignment in their State,which does not interfere or change the Constitution of the Scheme”.

Notwithstanding, the CP held a meeting with some of the members of the scheme  Wednesday,7th September,2022 at the command Headquarters,Osogbo despite the fact that there was no basis for the Constabularies action of Street Protest for “no  payment of salaries”which was not part of the agreement in principle.