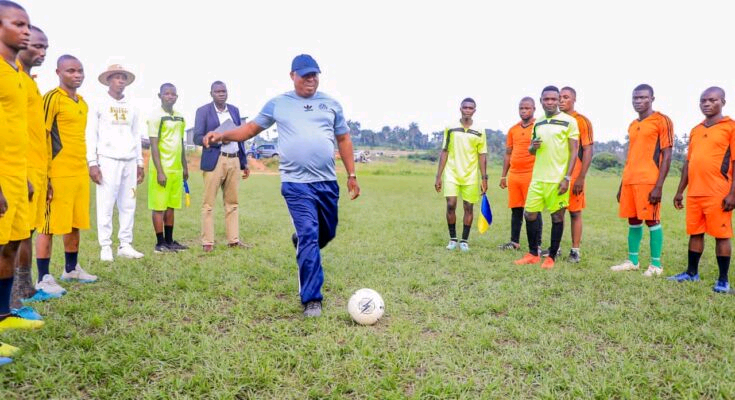 The Osun State Western Security Network Agency and Amotekun Corps today kick off the 2022 football competition in honor of Governor Gboyega Oyetola’s remarkable contributions to the corps in the state.

This year’s tournament is dedicated to Rt. Hon. Timothy Owoeye, the Speaker of the Osun State House of Assembly.

In his opening remarks during the symbolic kickoff at the Lanreleke Football Academy Ileogbo in Ayedire Local Government area of Osun State, the speaker commends the leadership of the corps in the state for their support in securing the state from criminals and marauders.

The Speaker further said *“ Sports especially football remains the best tools to use in curtailing social vices and criminality, it is also a source of engagement to the generality of our youths”* Hon Owoeye advises corporate organizations and individuals to invest in sports in Nigeria.

In his closing remarks on behalf of the Board Chairman, the Corps Commander, the field commander of Osun Amotekun Corps, Comrade Amitolu Shittu applauded the speaker for his support, contribution, and encouragement to the corps right from inception which has helped the corps to curtail the rate of criminality in the state within a short period of its establishment.

He also said the tournament is dedicated to the speaker to appreciate his zeal and contributions to the establishment of Amotekun Corps in the state.