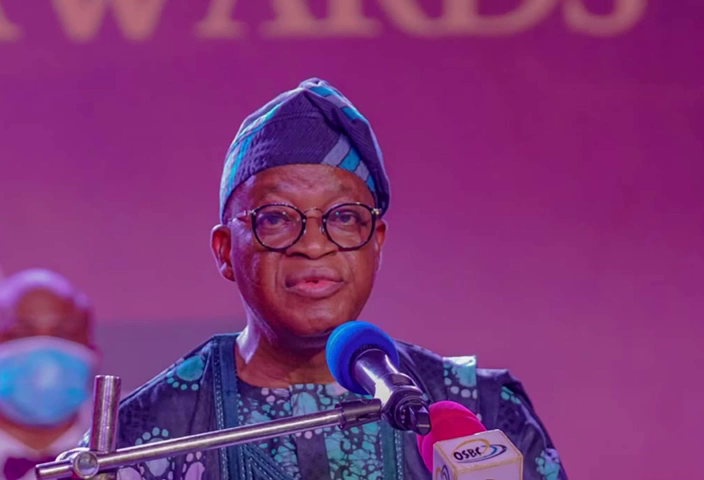 Prominent Nigerians from all works of life, on Thursday, converged in Osogbo, the Osun State capital to felicitate with the government and people of Osun as the state concluded its 3oth anniversary celebration presentation of awards to distinguished citizens.

This is even as the Governor of Osun, Adegboyega Oyetola, charged citizens to pull their collective strength to work, irrespective of their political differences and sentiments, for a  greater tomorrow, saying that  State building is a collective enterprise.

Recall that the State had earlier announced that the Banquet and Awards ceremony would grand of the series activities lined up to celebrate the 30th anniversary of the creation of Osun, where 28 distinguished and prominent citizens of the State would be honoured .

Describing the event as symbolic, Oyetola, who ensured a minute silence in honour of 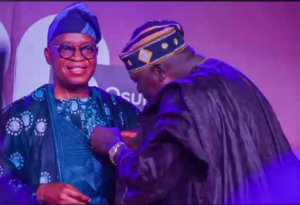 the first civilian Governor of the State, the late  Isiaka Adeleke, said it was deserving to pay tributes to the illustrious men and women who have held sway as leaders of the people.

He said, ‘’We are here today because you all provided direction and showed distinct leadership in a manner that has earned our State its deserved recognition and reputation over the years. We are grateful to you all.

This banquet award is designed to recognize and celebrate our distinguished citizens and friends of the State whose phenomenal contributions in various fields of endeavour have made Osun proud and have helped to build the Osun of our founding father’s dream.

‘’They are eminent individuals whose contributions and legacies have inspired our people, especially our youths, to believe in our dear  State and continue to fly its flag high.

‘’Knowing how blessed we are with the gift of highly illustrious and accomplished men in all facets of life, we have resolved to continue to honour the best of us. This, we believe, will motivate our teeming youths to aspire high and achieve greater heights.

‘’On behalf of the government and the good people of Osun, I thank our awardees for their monumental contributions to our dear State, the Nation, and the World, and for leading lives that inspire us and our posterity to build a  greater Osun.

‘’State building is a collective enterprise. Therefore, we all must, more than ever,  pull our collective strength to work, irrespective of our political differences and sentiments, for greater tomorrow.

We must consider it an urgent task to galvanize our diverse strength, goodwill, and resources to chart a pathway that delivers the Osun of our dreams. That is the least we owe ourselves and the generations coming behind us. We cannot afford to fail.

‘’I call on all to rise and let us build a better Osun that is reflective of our true potential as the cradle of humanity’’.

Governor Oyetola also urged the citizens to continue to collaborate with the government to achieve sustainable development promised and already being delivered.

He continued, ‘’Let us drink and toast to our collective success and the avowed resolve of our administration to build a solid structure for trans-generational development in Osun.

‘’The journey to building a stronger and more prosperous Osun continues with greater resolve and hope from here I invite you all to come on board,’’ he added.

Also speaking at the event, the Alaafin of Oyo, His Imperial Majesty, Oba Lamidi Adeyemi, commended the government of Osun on the awards, describing it as a welcome development because of its potential to ignite high hopes and hunger for diligence and excellence in the youths. 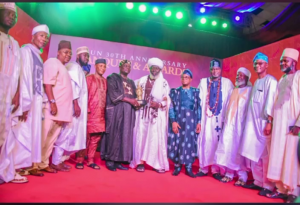 Chief Bisi Akande in appreciating the honours done by past leaders, commended the government of Osun for recognizing the services and labours of the former governors. 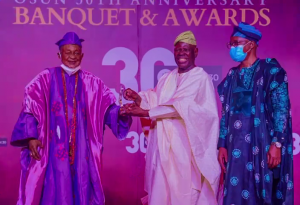 He observed that the journey into the position of power was filled with the good, and the bad as the past governors have experienced series of challenges while in power such as labour unrest and difficulties in payment of salaries of workers with the State meager resources.

He congratulated and commended past governors for meeting these challenges despite the meager resources that accrued to them from Abuja and called on the people of the State to continue to offer the necessary support to the administration of Governor Adegboyega Oyetola in order to take Osunto an enviable height.

I pray  Osun will continue to grow from strength to strength and I pray all the past leaders will never have reasons to regret the services that have rendered to the State,’’ Akande said.

One of the high points of the event was the decoration of former Military Administrators and Governors of the State since its creation in 1991 by the incumbent Governor Adegboyega Oyetola.