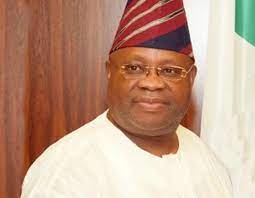 …says agitations for West Agenda political  hallucination at the moment

A former Speaker of the Osun House of Assembly and Nigeria’s Ambassador to Mexico, Hon. Adejare Bello has asked one of the candidates of the People’s Democratic Party(PDP)  aspiring to be governor in the State, Mr. Ademola Adeleke, to wait  till  06 before aspiring to be Governor.

Adejare, who was a to-term speaker  in the Osun  State House of Assembly, made this known on Monday while  featuring  on a popular Yoruba sho on Radio, ‘Oro  Oselu’

He said, the incumbent Governor has done creditably well and deserves to be returned for a second term.

He acknowledged some  of the developmental strides that the Administration of Governor Oyetola had made  in the last three years, particularly in Ede Federal Constituency, saying, West Agenda is a failed agitation  at the moment  in view  of the current  political  forecasts

Bello also appreciated  Governor Oyetola for saving him and his colleagues from the constituency of the embarrassment resulting from their inability to facilitate the reconstruction of the 20km Ejigbo-Ara-Ede roads for the 20 years they spent cumulatively as Speakers.

According to him, Governor Oyetola has removed the tag of bastards on the political leaders from the Ede Federal  Constituency.

The Ede –born politician, therefore, reassured the people of the State of the commitment of Governor Oyetola-led-Administration to transform the  State.