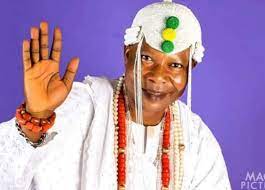 The gruesome murder of the Olu of Agodo, Oba Ayinde Odetola has led to the arrest of suspects, who have told the police why the dastardly act was committed.

The monarch, with three others, was attacked by some assailants who fled immediately after setting the Oba ablaze in his car.

However, the efforts of the police officers from  Zone 2 comprising  Lagos and Ogun States paid off as 11  suspected culprits have been apprehended. 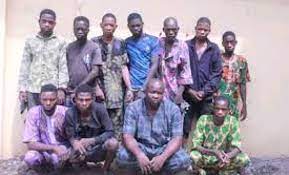 While narrating to the police the reason for their action, they said he was a land grabber, otherwise known among the Yoruba as ‘Ajagungbale’.

According to Hauwa Idris Adamu, the Zonal  Police Public Relations Officer, Onikan, Lagos, a  brother to the monarch, Odetola Okuribido, had petitioned the police that the late monarch was murdered by one Gbeminiyi Sotade and his accomplice.

Okuribido told the police that the deceased was in Agodo village on a portion of land to clear the graveside of his late brother.

He said a group of about 50 hoodlums, ‘’led by one Gbeminiyi Sotade attacked him while three of his relatives were assaulted and machete,’’.

He explained to the police that the hoodlums dragged Odetola into his Toyota  Sienna Car, saying one Agbara drove the vehicle to a nearby forest.

‘’They poured petrol on him and the vehicle was eventually set ablaze with his corpse locked inside it’’. It was revealed.

Contrary to speculations, Adamu added, the three persons attacked along with the Oba-Deborah Onilere, Alfa Wahab, and Lydia Odetola did not die as they narrowly escaped death.

Meanwhile, the 11 arrested suspects have confessed to the police their involvement in the crime.  When asked why they murdered the Oba, ‘’they claimed he was an ‘’Ajagungbale’’(land grabber).

11 Suspects arrested in connection with the murder of oba Akodo

Sporadic efforts are in top gear to arrest other suspects at large, Adamu stated.

He warned people against taking laws into their hands, stressing that whoever is caught would face the full wrath of the law.