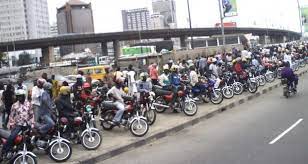 The Federal Capital  Territory Administration (FCTA) has resolved that commercial motorcycle operators otherwise called ‘’Okada’’ riders,  are now required to obtain a license before they can operate within the city and its suburbs.

The Director of the Directorate of Road Transport Service(DRTS), Federal Capital Territory Administration(FCA) Bello Abdullateef, said this on Thursday, at a media briefing organized by the  Presidential Communication Team at the  Presidential Villa in Abuja.

Abdullateef said,  that beside the traffic violations, the riders were also being used to traffic hard drugs across the city.

‘’The menace arising from many okada riders is not just about traffic violations, but also perpetration of crime. Okada is used to to deliver hard drugs across the city’’, he said.

‘’It  requires  a multi-sectoral approach  to deal with  the menace .’’

‘’We are introducing  riders  Certification for those using Okada for dispatch activities.’’

‘’Therefore, until you are verified by the directorate of road transport  Service, you may not be able to ride a bike across Abuja.

‘’We are remodeling the licensing and regulations as well’’.

These would be carried out to dissuade the use of Okada. A total ban has been suggested but it is still being considered.

‘’Some of the Contiguous States are already banning. And if we don’t ban it, FCT will be a dumping ground in a few years’’.

Recall, that Babajide Sanwo-Olu, the Lagos State Governor, announced a ban on Okada operators in six LGAs of the State, which took effect on June 1.

The directive was announced a few days after some commercial motorcyclists lynched a sound engineer identified as David  Imoh in the Lekki axis of the State.

Meanwhile, Seyi Makinde, the Governor of Oyo state has said that he has no intention of placing a ban on Okada riders in Oyo State.

In his tweets on Saturday, Seyi Makinde said, the State will not replicate the drastic action in Lagos.

Besides,  the fact that Okada is an important means of transportation, Makinde said a ban will leave a lot of people unemployed.

‘’We make decisions based on data, science, and logic. If they ban them in Lagos, how long will it take them to realize the benefits? The situation in Lagos is the same as ours’’, he said.

‘’We have no intention of banning  Okada. We will regulate them, we will identify them and the criminals will be dealt with.’’.

‘’I have seen people with their cars jumped on an okada to go to the banks. They are serving a purpose.’’

‘’We have started identity management. If we say ban because  Lagos did it, what next? Those riding Okada   legitimately  you take them out of business.’’

‘’When we identify them, who, what, where, we let people know that there may be criminal elements.

‘’If we wholesale send them out, we will have more criminal issues. They could become armed robbers’’.

Meanwhile, the FCTA has said Okada riders now need to obtain a license to operate within Abuja city and its suburbs.

Abdullateef said, that besides the traffic violations, the Okada riders were also being used to deliver hard drugs across the city.