The former President Olusegun Obasanjo has turned into a tricycle rider in Abeokuta, picks up passengers, and says he employs 5,000 youths. 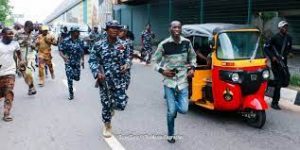 GoldenNews reports that Olusegun Obasanjo, on Saturday, rode a commercial tricycle across parts of Abeokuta, the Ogun Sae Capital.

The former president had in June  2022, donated tricycles to empower 85 people to mark his 85th birthday celebration.

Sharing photos of Obasanjo on his Facebook page, Daniel Olusana, a photographer, said the former president rode from his residence in Abeokuta to the Kuto underbridge area.

Obasanjo, en route from his residence to Kuto underground bridge, stopped to pick up a male passenger o to demonstrate ha riding the tricycle is safe if used properly and for people, o cultivate the habit of starting small-scale businesses and growing their businesses.

Speaking after returning from the OOPL premises, Obasanjo said he embarked on riding the Keke to demonstrate to the people that there was nothing bad in riding ‘Keke’ and using the same for commercial purposes.

He said,’’ There is nothing wrong with young people starting small. The Keke  is secure and safe when handled  professionally and with  discipline.’’

‘’In fact, you can plan your business the way you wish and earn income that you can deploy to other investments. And if you are able to get a second one, you can give that to someone else. So, you become self-employed and you have also employed somebody’’.