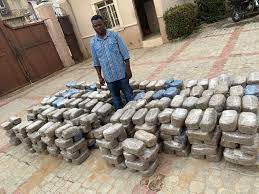 The Director of National  Law Enforcement Agency (NDLEA), Media and Advocacy, Femi Babafemi has announced the discovery of three drug Cartels allegedly supplying illicit substances to some states in the Country.

This was contained in a statement issued on Tuesday in Abuja. The agency also recovered Skunk and Cocaine weighing more than 843 kilogrammes.

The Interviews Nigeria reliably gathered that. the operatives have also arrested no fewer than seven drug kingpins behind the syndicates in separate raids in Nasarawa, Kogi and Benue States.

According to Babafemi, the arrest was made when the Culprits tried to evade the frequent road surveillance efforts by officers of Kogi State Command of the agency.

He goes further to say, that the Cartels were intercepted on July 12 at a jetty in Idah, Kogi State in a Car with the registration number Lagos SMK 345 CG, loaded with kilogrammes of Cannabis Sativa.

He added, ‘’In Nasarawa State, a team of NDLEA Operatives had on July 8 raided one of the most deadly drug joints in the State Capital.

‘’ More than 356 kilogrammes of Cannabis and other psychotropic substances were recovered. This is in addition to the arrest of four major drug dealers, including the drug Kingpin in Nasarawa State.

‘’Curiously, some quantities of Cocaine were intercepted in Benue on July 8, July 9th and July 13.

‘’Indeed, the supplier was arrested with 29, 17 grammes of Crack Cocaine’’.

In another raid on July 13, the Benue Command also seized some quantities of Cocaine .’’

Babafemi quoted the Chairman of NDLEA, retired Brigadier General  Buba Marwa, as commending the Commanders, Officers and men of the Kogi, Nasarawa and Benue States Commands of the agency.. He said , Marwa charged them not to relent  but remain resolute in their commitment to rid every community of illicit drug peddling