Nadia: Rated Among Most Powerful Women In International Sports 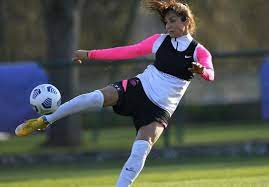 Nadia Nadim was a refugee who was born in Afghanistan. Her father was murdered by the Taliban when she was 11 years old, so her family fled to Denmark on the back of a truck.

She completed medical school and she’s studying to become a reconstructive surgeon when her playing days are over.

Nadia speaks 11 languages fluently and is on the Forbes list of Most  Powerful Women in International  Sports.

Somebody says, if you want to show your daughter a role model, show her Nadia Nadim and not those exposing their God-given bodies, having sex in the open like the BBNaija housemates!