Man Dressed in Suit and Tie Hawks Agidi in Uyo 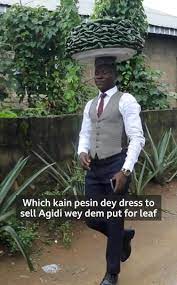 If not for the tray –filled with agidi, which he carries on his head, you may be tempted to think that Moses is a banker going to the office.

Eteng, 24, lives and does his business in Uyo, Akwa-Ibom State. Eteng wears a neat suit with a well-knotted tie every day he goes out to hawk  CORN FLOUR JELLOS commonly called agidi in some parts of Nigeria.

To sell agidi in Nigeria is regarded as a low-level business, and those hawking agidi are usually dressed in less attractive and not formal. But not with Eteng.

In an interview with PREMIUM TIMES, Thursday, Mr. Eteng said he chose his style of dressing to enable him to stand out while he is hawking on the streets.

‘’When you’re doing a business, you must study people to know what people like. What I am doing, people like it but they cannot do it, and that’s what makes me stands out. I dress like this  because  this is my brand and I am trying to promote  my brand’’

‘’Anybody that looks at me will know that my products are exactly the way I look. Most times, people don’t want to buy, but when they look at me, they will say, if you are neat like this, it means your product is neat’’.

‘’So, my dressing encourages a lot of people to patronize me’’ he said.

A Premium Times reporter, who spoke with Eteng on the street where he was hawking, witnessed a customer who bought agidi and said’’, ‘’I am buying from him because he is a hardworking guy and I love how he is dressing, not necessarily because I need it(agidi)’’.

Apart from attracting customers to him, Mr. Eteng’s dressing has also earned his business the nickname ‘’educated agidi’’ among the customers.

Eteng is a self-sponsored secondary school graduate who began selling agidi for his aunty in 2008 till 2018. He started his own business of selling agidi in July 2018.

He is from Yakurr Local Government  Area of Cross River State.

‘’I decided not to stay with her again so she took me back to my village. I  had to gather money and come back to Akwa Ibom. When  I came back, I  started the business by myself.

‘’Then, I was still in school and this is the business I used to train myself from my SS1 to SS3.  That is how I started the business,’’ he added.

He said he goes through a rigorous process to prepare the agidi in order to maintain good hygiene.

Like many other hawkers on the streets of Uyo, Eteng sells till as late as 8 p.m before returning home.

In a random interview, some of the customers confirmed that Eteng ‘s agidi tastes really nice.

Eteng success story is one, that precisely captures the saying that there is dignity in labour.