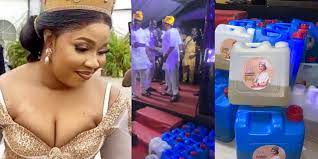 A Lagos Celebrity, Ms. Ogbolu Pearl has been sentenced  to 2 -year jail term for distributing Premium Motor Spirit ,(PMS) as souvenir at a party , theinterviewsng reports.

The convicted socialite, Ms Ogbulu was earlier arraigned  on March 14, for distributing PMS as souvenir at her installation ceremony on 5th , March 2022.

While delivering her judgement, after the defendant changed  her plea of ‘not guilty’  to guilty  , the Chief Magistrate Kehinde Ogundare sentenced her to three months imprisonment or option of fine of N15,000 on the first count of the charge.

The magistrate also ordered the defendant to pay N1million  fine on the second  and third count or face two years imprisonment.

Magistrate Ogundare held that the prosecution has successfully proved the charge  against the defendant  beyond a  reasonable doubt and thereby found her guilty and sentenced her accordingly.