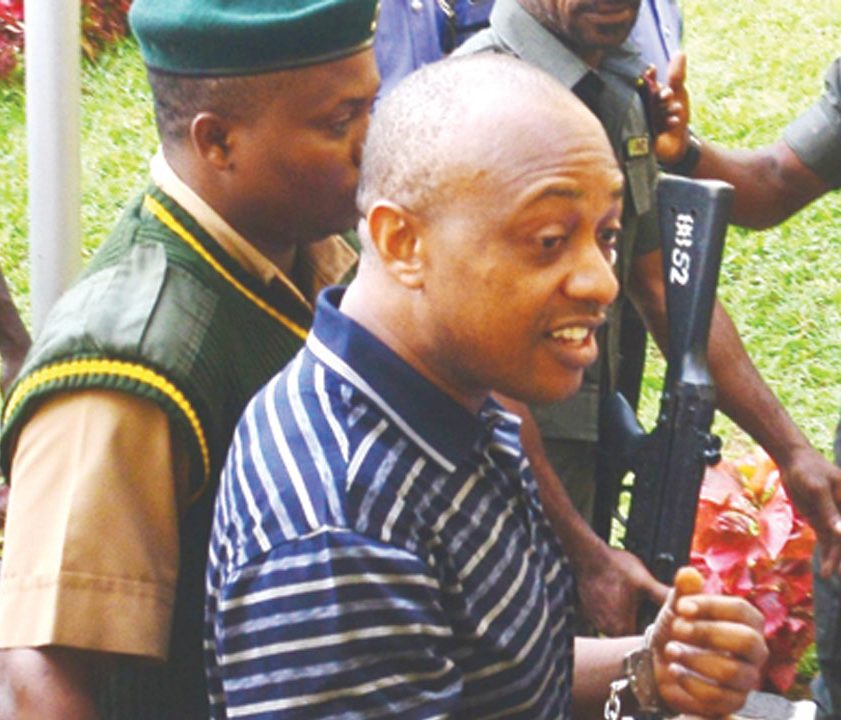 The Ikeja  Special Offences  Court on Monday  sentenced kidnap Kingpin , Chukwudimeme  Onwuamadike , a.k.a Evans to 21  years imprisonment   for kidnapping  a businessman  Slyvanus  Ahamonou and collecting  420,000 dollars as ransom from his family.

His accomplice , Victor Aduba, an ex-soldier , was also  sentenced   to 21 years imprisonment  on a four-cpunt charge    in connection  with  kidnapping  and unlawful  possession of firearms.

While delivering judgment , Justice  Oluwwatoyin Taiwo , held that  the prosecution  had successfully  proved the  case  of kidnap and possession  of firearms  against  the convicts.

‘’It has   been established  by the prosecution witness (PW3, Ahamonou) complainant was  kidnapped .

‘’PW3 identified  the first defendant  in court  while  he was giving  his testimony. He also recognized  him  at the police station  nearly two months  before  the matter  was taken to court.’’

‘’He testified that he was  blindfolded  before being  taken to the bus.. He said, ‘Immediately  I saw him , I  said  this was  the person   that kidnapped  me’’. I also  watched  the video  where  the first defendant admitted  to having  kidnapped PW3.

‘’The first  defendant  sat in a  comfortable chair  and there  was  no sign  that he made  the statement  under duress.

‘’He was   not threatened   or harassed. He  signed the statement.

‘’He also  said how  he broke into  banks and later  graduated  to kidnapping. I am  satisfied  that  this court  can convict  the defendant  through  his confessional  statements’’, Taiwo said.

The Judge also held  that there  was no proof  before  the court that three of the Evans  men were killed  by the police.

She also convicted Aduba on his confessional  statement , and held  that he should  serve out  his term without an option of fine.

‘’I have considered  the allocates  of the defence  counsel . This sentencing  will serve  as a deterrent  to others.’’

‘’The sentencing  will however , run concurrently . They  are hereby  sentenced to  21  years imprisonment without an option of  fine ,’’ Taiwo  submitted.

The first  defence counsel , Mr  Amobi Nzelu , in his allocutus, prayed the court  to temper  justice with mercy , adding  that the convict was already  serving a life jail term.

The second defence counsel, Nrs Adeola Folarin, in  her allocutus, also prayed  the court  to temper  justice wit mercy  as the convict was a first offender.

‘’He also  had a child while  he was  in custody . He is a father of two  young children  and they have not  enjoyed  his fatherly   love.. We pray the court  to temper  justice with mercy’’. Folarin said.

The State Counsel , Mr  Yusuf Sule , however,  urged the court  to convict  the defendants  as charged.

‘’My Lord, the first defendant had been   sentenced  to life imprisonment before  Justice  Hakeem  Oshodi.  I urge the court  to senten the defendants  accordingly,’’ she said.

Ahamonou and his wife , Chimebere hsad on December 17,2021 testified  virtually  about how Evans  and his gang kidnapped  him on June 23,2014 on Kara Road, Off Osolo way , Ajao Estate , Lagos.

The couple narrated  how  they  sold properties , borrowed  money , raised  funds  from family  and well wishers  to attempt to raise the initial  2million  dollars  ransom  that was  demanded by Evans.

Sylvanus whose   hands and legs  were chained  throughout  his two months  in captivity , was only  released  when the family  had allegedly  given Evans 420,000 dollars ransom and he was  at the point  of death.

NAN also reports  that Justice Hakeem Oshodi  of the Ikeja High court  had on February 25 sentenced  Evans  to life imprisonment  for the kidnap  of Mr  Donatius Dunu , the Chief  Executive Officer of Maydon  Pharmaceuticals Limited.