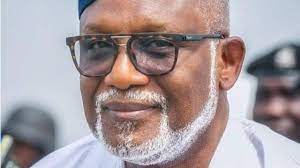 The appeal filed at the Supreme Court by the PDP governorship candidate, Eyitayo Jegede  against the election of Ondo state governor, Rotimi Akeredolu, in the October 10, 2020 governorship election in Ondo State has been thrown out in favour of Governor Akeredolu of the All Progressive Congress(APC0

The Supreme Court Justices were divided by a 4-3 over Jegede’s appeal against Akeredolu’s victory.

While four out of seven-member Panel of Justices of the Supreme Court dismissed the appeal for failure to join theYobe State Governor, Mai Mala Buni, as a party in the petition, 3 of the Justices, including the presiding Justice-Mary Peter Odili upheld that the appeal should be allowed.

Justices Odili, Ejembi Eko, and Tijani Abubakar, who dissented in their judgment, held that Buni, as an executive governor of a State, cannot act in the capacity of acting Chairman of the APC.

It was also held that the Yobe State Governor acted in violation of section 183 of the 1999 Constitution(as amended).

However, in the majority judgment, four of the Supreme Court justices concurred with the concurrent decisions of the Ondo State Governorship Election Petition Tribunal and the Court of Appeal in throwing out the appeal for lack of merit.

Recall that Eyitayo Jegede and his party are challenging the declaration by the Independent National Electoral Commission (INEC) of Akeredolu as the winner of the October 10,2020, Governorship Election in Ondo State.