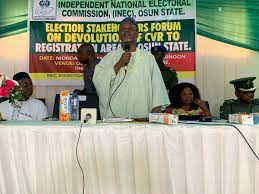 A stakeholders meeting for the VR was held at the INEC office, on Monday,21st 2022 at Olusegun Agbaje Media  Centre, Osogbo.

A purposeful and educative presentation was made by the Deputy Director of ICT Dr Lawrence Bayode.

In his impressive introduction, the ICT Director highlighted what the Commission has been involved in since 2011.

According to him, the Commission since 2011 has progressively deployed technology to improve the transparency and credibility of the electoral process in Nigeria.

‘’The introduction of  chip-based voters’ card and Smart Card Reader (SCR) technologies for electronic accreditation of voters were widely acclaimed  to be  behind major improvements in the quality  of elections, particularly in2015;’’

‘’Since then the electorates have yearned for more technologies to reduce human intervention that could alter the wishes of voters in elections,’’ he said.

‘’Consequently, the Commission began to electronically publish images of polling unit results through its INEC  Result Viewing (IReV) Portal. This system has been deployed  in several major  off-season /end-of tenure and bye-elections.’’

Dr Bayode emphasized that different technologies have been applied over the years, and regularly, INEC  has also made it a point of duty to continuously improve and redefine the technological process.

The ICT  guru, based his presentation on four major aspects:

Because the register of voters is the bedrock of any credible election, Dr Bayole says, the need to have a register devoid of irregularities is sine-qua-non.

According to him, ‘’one of the activities that were recently improved upon is the deduplication process.

Hitherto, the Commission has always used only the fingerprints to detect multiple registrations, but recently, the facials have been added-introducing the Automated Biometrics Identification System’’(ABIS).

‘’So, after the registration exercise, ABIS  has the capacity to remove all voters that were registered multiple times, leaving the earlier record and removing the new record’’, he said.

Dr Lawrence Bayode emphasized the need for one-person-one-vote as imperative for any credible election.

In his submission, Smart Card Readers (SCRs) were first deployed in 2015 and has been used at every election since then. The Smart Card Readers are used to match fingerprints captured from the same voter when he/she was registered.

He therefore says,’’ the Commission has decided to improve the accreditation process.

The ICT   Deputy Director said,’’ The Commission has explored a mono-modal biometrics system with the use of SCRs, and has observed the fact that not everybody has fingerprints.

Therefore, with an additional biometric feature like the face, every human being has a face, therefore there is no loophole that can be exploited in the system.

‘’Facial Technology, which was pioneered in the 1960s, has efficiently advanced in the last  50 years and can be as much of 99.9% successful rate’’, says Dr Bayode.

‘’Adding  the facial technology  to the existing  fingerprint technology  would ensure that all voters  are authenticated by either  of the technologies or both of them.’’ ‘’With bi-modal authentication, no person can come to vote more than once, as the face of the person would have been captured during authentication, which further guarantee one-person-one-vote.

According to him, ‘’This multi-functional, integrated device has different acronyms for different activities it is used for as follow: INEC  Voter Enrolment Device(IVED)-during registration, Bimodal  Voter Accreditation System(BVAS) during voter accreditation and INEC Results Viewing  Device( IReD Device) during results Upload.

‘’In order to improve the openness and credibility of elections, INEC decided to make available electronic copies of the PU Result Sheet (EC8A)  for the General Public view’’, said Dr Bayode.

‘’This implies  that the ECSA form  filled and signed  by each  Presiding Officer (PO) is scanned or photographed  and uploaded  to a Public Domain which  can be viewed  by the General  Public.’’

‘’This has been successfully deployed since the 18th August 2020 Bye-Election in Nasarawa  State, till date, and it will also be used in the 12th February 2022 Area Council Elections in the FCT’’, he said.

Explaining the IReV process flow, the INEC   ICT GURU  says, the PO, at the end of polls, scans/photographs the  EC8A and uploads it as a PDF file(using the BVAS.

Dr Bayode said the public portal is on URL-https://inecelectionresults.ng’’. He counselled that ‘’any interested person can visit the site but he would be asked to register on the portal with his/her:  Full name, State or Country of residence’’.

He goes further,’’ a verification mail will be sent to the registered e-mail to prevent the denial of access from internet bots(application s running automated tasks on the internet) as well as other Spyware or Malwares that may target unsuspecting users of our system.

In rounding off his presentation, Dr Bayode  INEC ICT Expert emphasized that the Commission’s (INEC) desires to have credible elections is sacrosanct.

He, therefore, asked for the cooperation of Stakeholders to enable the Commission to meet its set objectives.