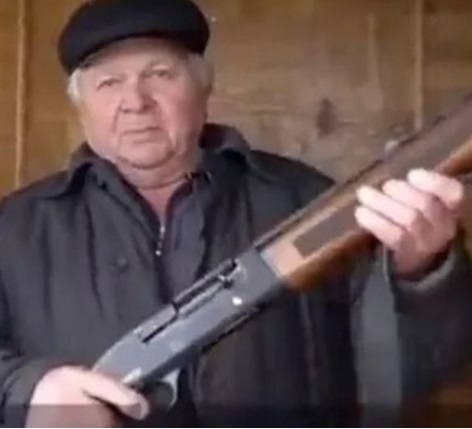 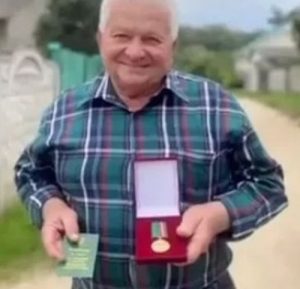 An Award of a medal has been bestowed   to a Ukrainian  Pensioner   for shooting  down a #74million SU-35 Russian  Fighter Jet  with his  hunting gun.

The incident happened  at a Ukrainian city  under pressure  from Vladimir Putin’s army.

The pensioner reportedly  stood  on the roof  of his house  in Chernihiv to shoot down  the supersonic  jet.

In a video  clip posted  by Ukraine’s  State Border  Guard Srvice, Valeriy Fedorovych explains   how he  climbed  onto the roof of his house  to take a pot  shot at one  of the fighter jets  bombing his city.

Images from the  video  show the SU-35 jet hurtling towards the ground , as onlookers cheer its destruction.

Mr Fedorovych is also  filmed  with his rifle  slung  over his shoulder  and wwalking around  the bombed  out ruins  of his neighbourhood.

He shows off  remains  of the destroyed Russian jet , that  he reportedly  keeps in his garage.

The  incident  took place  in August  and the pensioner  was later awarded  a medal  for his actions.

The  State Border Service  of Ukraine  called Mr Fedorovych  a’’hero’’ and said they  wanted  to reward him  for his ‘’assistance in the protection  of the State  border.’’

A photo  shows  the pensioner ‘’hero’’ proudly  exhibiting  his medal  to Journalists.