BOKO HARAM AND TWITTER BAN: We are Winning The War Lai Muhammed 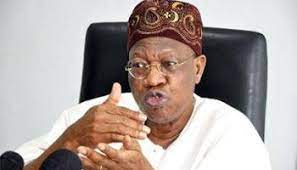 Below is the transcript of the  Interview by the BBC Africa’s Peter Owoche with Nigeria’s Information Minister, Lai Muhammed:

Lai Muhammed: ‘’ The good news is that the government is winning the war against insecurity, be it Boko Haram, be it banditry, be it separatist, you know, movements, we are winning the war’

Peter Okwoche: But how can you say that when, even just last weekend, you know, we saw them attacking schools in the North-West of the country?

Lai Muhammed: I didn’t say that we stopped banditry or that we stopped….. I said that we are winning the war against them. Even the safest country in the world will still witness crimes, you know, on a daily basis, but it is the response of that government to the crimes that makes all the difference.

And I say, if the numbers of Boko Haram insurgents that have given up, their soldiers who have surrendered in the last few weeks is anything to go by, if the successes of the military( here I’m talking about both the Air force and the ground force) is anything to go about in the war against bandits, we are winning the war].

PeterOkwoche:  For you to say, you are winning the war, yet you have the governor of Katsina State who has just told citizens in that State to arm themselves to fight the bandits, you have no less than the minister of defense say exactly the same thing back in February, that civilians should take up arms now to fight these bandits if you were winning the war, why would civilians have to come out and fight?

Peter Okwoche: But I mean, I doubt very much if you could say that to the families of those people who are still being killed almost on a daily basis by insurgents, by kidnappers, by bandits, by cattle rustlers, would you consider that a fair thing to tell to them that you are winning this war even though their people are being killed?

Lai Muhammad:  Probably the world would better appreciate what Nigeria has achieved when they see the US  after 20 years, a trillion dollars down the drain, thousands of lives killed, it took the Taliban only a few weeks to come back. That  is not happening in Nigeria( Lai Muhammed’s last words were inaudible)

Peter Okwoche: Some people would argue that rather spend your time facing all these challenges, you know, rather than that, you are trying to muzzle free speech, you know they point to your ban on Twitter, even though Nigerians have disregarded that ban and you can almost do nothing about it.

Peter Okwoche; But that’s not the reason why you banned it because your ego as a government was bruised when President Muhammadu Buhari’s tweet was removed by Twitter.

Peter Okowoche: Where are the talks with Twitter now? Are you guys going to unban them soon?

Lai Muhammed: Well, all I  can say is that we’ve engaged and it looks like we are making progress.

HEALTH: AN INTERVIEW WITH AN EXPERT-Pharmaceutical Madness in the Country