Aftermath of EndSARS REPORT in Lagos: Buhari may be Tried at The International Criminal Court 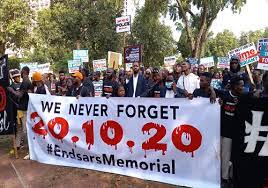 Nigeria’s President, Mohammadu Buhari may face trial at the ICC over his possible alleged role in the shooting of the unarmed protesters at Lekki Toll Gate during the EndSARS protest on October 20, 2020.

The petition was addressed to the International Criminal Court (ICC) to arraign  President Buhari for crimes against humanity.

The findings of the panel set up to investigate the shooting of peaceful protesters at the Lekki toll gate in Lagos during a demonstration against police brutality on October 20, 2020, had confirmed in its report that at least 9 persons died.

The report released by the panel on Monday also confirmed the excesses of the police and military personnel as well as the ugly incident at the tollgate.

The panel had also described the killing as a massacre’’.