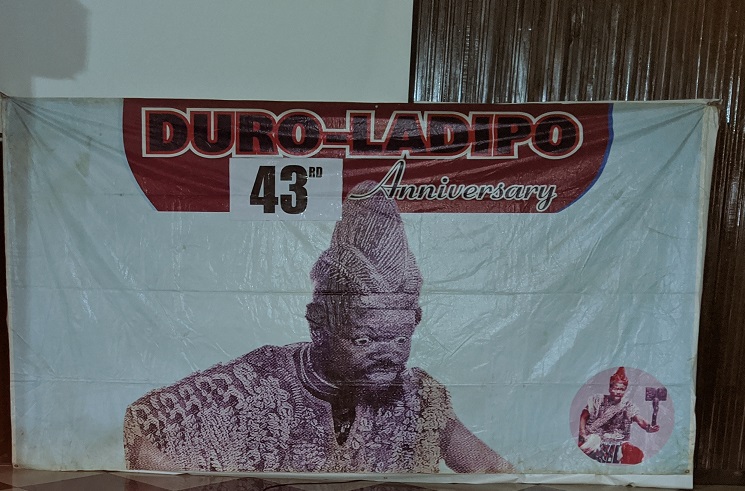 The 43rd Anniversary of the demise of the theatre guru, Duro Ladipo-aka-‘Sango-Oko-Oya’ fame was marked this year with an Inter-Schools Theatre Competition in Osogbo, the State of Osun at the Uli Bier Centre for Black Art and Culture Hall, Abere on Thursday 5th August 2021.

While welcoming the student participants in the competition and all the distinguished personalities present, Mrs. Solabomi Duro –Ladipo Akinsola(Daughter of Duro –Ladipo) appreciates her father, the theatre Icon with nostalgic feelings. 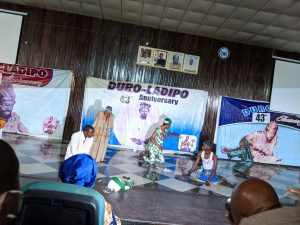 ‘’We are here today to celebrate a lover of Yoruba culture and tradition and the foundation laid for the Yoruba theatre.’’ We are doing this to be sure that theatre art is not dead and you will see this here today in the talents and zeal that will be displayed by the students in their various performances on stage’’.

‘’I thank the Ataoja of Osogbo, his royal highness Oba Jimoh Olanipekun and other notable personalities here present for the support and love for Yoruba culture and Duro- Ladipo’s family’’. 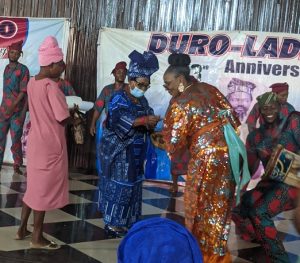 Mrs. Solabomi-Duro-Ladipo Akinsola called for a minute silence for the late Olufon of Ifon Osun-Oba Magbagbeola Al- Moroof, ”who in his lifetime loved the Yoruba culture and the theatre art as he always attended most of our their stage performances”.

‘’Let us observe a minute silence for the late Olufon of Ifon-Osun, Oba Magbagbeola Al- Moroof who was a lover of Yoruba culture and tradition and who always took time off to watch us performed on stage each time we invited him to our stage performances’’, she said. 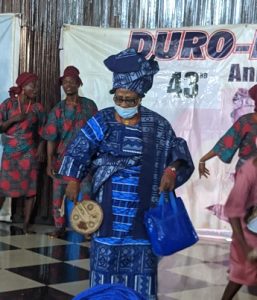 ‘’ I also thank my mother Mrs. Abiodun Duro-Ladipo who gave us the training and support to love theatre art and build on the foundation they have laid for us’’. She also lauded the State Governor of Osun, Oyetola Adegboyega, ‘’who is a lover of Yoruba culture and tradition without which the hall, the anniversary is being held today would not have been possible’’. 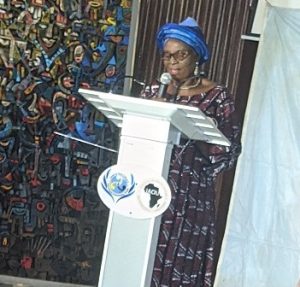 According to Mrs. Oyetola,’’ the design of this competition is such that our young ones would be properly educated and grow to become leading players in the theatre profession; this is the coveted feat’’.

‘’The concept of this competition is topical to our collective drive towards value and cultural re-orientation among our youths’’. This competition has continued to serve as a good ground for our young ones to catch on the theatre profession’’.

‘’Osun is known for its abundant cultural and natural resources which could be properly tapped to engage our youths lucratively’’, she added.

Accordingly, Mrs. Oyetola,’’ The creative industry is the alternative form of innumerable source of income for the national economy.’’ It provides job opportunities with diverse talents, therefore, it is necessary to encourage the efforts that will lead to greater development and employ more of our people in this industry’’.

‘’ Let me urge the theatre practitioners to join  in our campaign against some of the challenges that face women  in our country today.’’ These challenges manifest in various forms such as Gender-Based Violence(GBV), Rape, and the draconian practice of Female Genital Mutilation’’(FGM)’. ‘’There is also the challenge of Open Defecation(OD) which need to be rooted out of our State and society’’. I call on our creative writers, actresses, and producers, to join in this campaign. The drama could be used to drive this campaign. We need this collaboration more than ever before’’, she added.

In his own remarks, the Honourable Commissioner for Culture and Tourism in Osun, Mr. Adebisi Obawale Simeon, says,’’ We should let our children understand what we are doing’’. ‘’Whatever we choose as our profession can take us to a higher place.’’ Duro- Ladipo allowed his children to know what he was doing when he was on the earth and after 43 years, the children are building on his legacy’’. This means that he’s still living’’. ‘’Our children should lift the theatre profession to lofty heights and portray good conduct in their performances just as the State of Osun is known as the land of virtues’’, he added 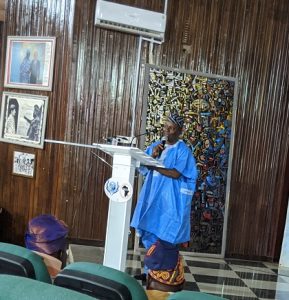 The honourable commissioner for Tourism and Culture also commended the Fakunle Comprehensive High School Students’ drama presentation and admonished all, to make use of the message put across.

‘’ I thank everyone in attendance and your support for Duro-Ladipo’s family. Very soon, there shall be stage performances here every three months and the first of its kind will be for free for every entrant’’. Also, the Osun State government will lend its weight in this regard’’, he concluded.

Chief Yemi Elebuibon, the ‘’Awise ‘’ of Osogboland, made some comments on his observations in one of the drama presentations. He counseled that ‘’ drama presentations should be exact; especially the one mimicking a particular character or protagonist. ‘’Duro-Ladipo would go to the source of his story to research before staging his play’’. This according to him, is because what we put across to the audience is what they see and believe’’. He also corrected the erroneous belief as shown in the said drama presentation, that the Yoruba people use human beings for sacrifice to ward –off evil or epidemics in the old days. According to him,’’ it is not so’’. Yoruba people made use of Animals and other things as sacrifices. He admonished theatre practitioners to always endeavour to use the replica of costumes prevailing at the period in history to the audience and the dramatis personae involved, so as not to confuse and misinform people about our culture.

‘’These children would soon grow into adults to continue in the theatre business’’, ‘’ so writers and teachers should make adequate research on stories and impart these children.’’. Duro –Ladipo is not dead but alive as shown in the drama,’’ he added. 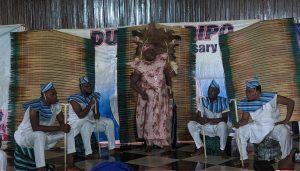 In the drama presentation by Fakunle Comprehensive High School, Osogbo, the thematic pre-occupation was the events germane in present-day Nigeria, where the unity of the country is at stake. The three major tribes, Yoruba, Hausa, and Igbo (as depicted in their costume and languages) were admonished to come together as one with patience, cooperation, and understanding’’.’’ And to share whatever binds them together evenly with dignity.’’