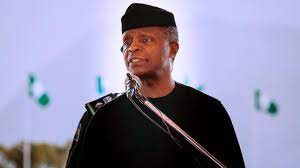 The Vice President, Yemi Osinbajo has been voted as the number one choice of Nigerians in the 2023 presidential elections, according to the analysis of a recent nationwide survey by the International Political and Research  Organisation (IPRO) to determine who the Nigerian citizen would prefer as their president.

The poll was co-signed by the coordinator/ Secretary, Dr. Ernest Ugbejeh, and the co-convener, Professor   Ike Ogba.

In the poll carried out by the IPRO, only two presidential aspirants were presented. Professor Yemi Osinbajo of the All Progressives  Congress(APC) and Alhaji Atiku Abubakar of the Peoples Democratic Party(PDP).

Respondents of the survey carried out between  June 3and 4 were asked a single question, who would they prefer as the next president of Nigeria in 2023:   Current Vice President Yemi Osinbajo of the APC or a  former  Vice-president, Atiku Abubakar of the PDP?

A random sample of 5,000 names in total was selected with respondents balanced across the geopolitical zones including every state   in the federation.

The survey was carried out by telephone calls with a response rate of52%.

The sample guarantees a three percent margin of error.

Glaringly,  as the survey indicated, Vice President  Yemi Osinbajo, was the clear winner in the overall results and in the five of the six geopolitical zones in the country.

It shows that Professor  Osinbajo is also the best choice for the APC and for Nigeria’’, the IPRO  Survey  Coordinator, Ugbejeh stated.