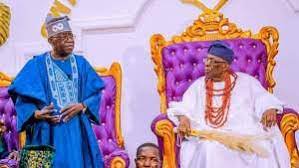 ……Thank Osun residents for their continued support to Oyetola

…..’You have done so much for humanity; it is a payback time’, Ooni, Aromolaran, others said, endorse Asiwaju Bola Tinubu

As a continuation of his consultation tour /visits to traditional rulers and eminent Nigerians across the country, the National Leader of the All Progressives Congress (APC), Bola Ahmed Tinubu on Thursday paid homage to his Royal Majesty, the Ooni of Ife, Oba Adeyeye Enitan Ogunwusi in Ile-Ife., Osun State. 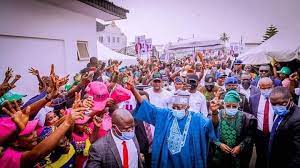 The former Governor of Lagos and the National Leader of the All Progressives Party(APC) showered encomiums to people and residents of Osun State for their unflinching support and cooperation with the Osun state Governor, Adegboyega Oyetola, since his inception. 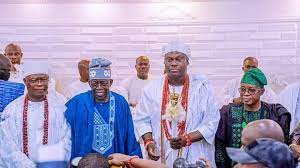 The Ooni of Ife, Oba Adeyeye  Enitan Ogunwusi, Owa Obokun Adimula of Ijesaland, Oba Gabriel Adekunle Aromolaran, the Orangun of Ila-OrangunOba Abdul-Wahab Oyedotun and the Ajero of Ijero kingdom, Oba Joseph Adebayo Adewole, eulogized Asiwaju Tinubu  and gave their backings to him in his presidential ambition. 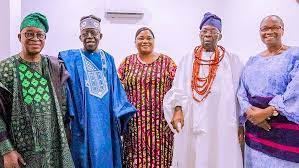 These traditional rulers endorsed the candidature of the Lagos-born politician for President, saying,’’ you have done so much for humanity, it is a payback time for Nigerians to elect you’’.

Recall that Tinubu had in the last few weeks started his consultation visits to traditional rulers and eminent Nigerians to formally inform them of his presidential ambition and receive their blessings.

Tinubu’s entourage moved to Ile-Ife and Ilesa where he was heartily welcomed and received by the leaders and members of the APC in the Sate, led by Governor Adegboyega Oyetola.

At the Ooni’s palace, Asiwaju Bola Ahmed Tinubu commended the traditional rulers for their unflinching cooperation and support for national integration, unity, and peaceful cohesion, just as he declared his ambition to contest for Presidency.

According to him, the visit was to intimate the monarchs in particular and Nigerians in general of his ambition to run for the presidential election, an ambition he described  ‘as timely and prompt’.

‘’I thank you all. I specifically thank the traditional rulers here present, I came here to seek your support and cooperation. You have known my intention already. You have known what I am aspiring for; all I need is your prayers’’.

‘’I have been supporting the people here and there. We have moved all over the country for one candidate or the other especially in 2013 when we campaigned for President Muhammadu Buhari after his emergence, we equally supported him in 2019.

‘’As you all know, what the Constitution says is just two terms for a president after which another person succeeds him. That is what we are going around the country to let our people know that I am  ready to succeed  the incumbent President after the expiration of his second term.’’

‘’Like you all know, what we are doing is to succeed him and I  want to vie for President. I want to succeed Buhari and I can’t do it alone without your support. I want your continued support. It is our belief that once Ooni, Orangun, Awujale, Alake, Owa, among others, speak, it becomes ours. With your support, it will come to pass.

” I am determined. Iam prepared and I am ready for it. God that put traditional rulers in their various thrones will not forsake us. He will put us there. I want to be President of the Federal Republic of Nigeria. I want your continued prayers,’’ Tinubu added.

Tinubu implored Nigerians to continue to be united and show love, peace, greatness, togetherness, and prosperity. He said, his determination to run for the presidential election was anchored on the need to consolidate on the modest achievements of President Buhari and set the nation on the path of national integration and cohesion.

Asiwaju tasked the citizens, particularly youths who have been aspiring to become President to champion the virtues of character, capacity, tolerance, endurance, consistency, integrity, diligence, and ability to see good things and take a leadership position to lead and sustain the country on the path of greatness.

In their remarks,  at different fora,(in their palaces) the Ooni of Ife, Oba Adeyeye Enitan Ogunwusi, and Owa Obokun, Adimula of Ijesaland, Oba Gabriel Adekunle Aromolaran, described Tinubu as the pride of Yoruba race whose great impacts in the lives of humans cannot be quantified. The two highly revered Obas agreed in readiness to support Asiwaju’s presidential ambition, saying he has paid his dues to be duly rewarded.

‘’You have done so much for humanity to be elected as President. You have made so many people in different capacities. You have done so well as a distinguished Nigerian. God has blessed you and you have used every stratum of your opportunity to advance humanity and develop capacity for generations. We are very happy to receive you today.’’

‘’You are our pride. You are our star. You are our moon. You are a rare gem at the moment and we pray God to continue to strengthen you and imbue you with all that will work for you to succeed,’’, Ooni said.

Owa Adimula, in his capacity, said, Asiwaju  Tinubu remains a true democrat that the nation needs at the moment in view of his noble contributions to national growth and development.

In his brief remarks, the Governor of Osun  State, Adegboyega  Oyetola expressed his gratitude to the people of the State, particularly the APC loyalists for renewing their confidence in his administration as demonstrated in the last primary election.

He expressed his confidence in the ability, capacity, and competence of Asiwaju Bola Ahmed Tinubu to take Nigeria to the promised land.