THE TROUBLE WITH NIGERIA 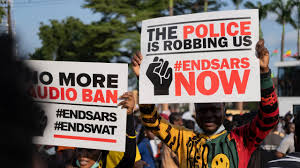 THE TROUBLE WITH NIGERIA-(1)

Barely a few weeks after the unceremonious ceremony of Nigeria’s 60th Anniversary, there was a tumultuous protest by the youths of this country, echoing and chorusing ENOUGH IS ENOUGH! Enough of alleged police brutality, enough of dishing out money to the police on a daily basis as they ask-‘’wetin you carry’’ –meaning,(illegal and deceitful way of requesting for a tip ), enough of the alleged SARSmen (Special Anti- Robbery Squad) brutalizing the youths driving posh cars or carrying laptops on the street with the prejudice that they are fraudsters. Enough of the alleged ‘escorting’ their victims to the ATM machines or asking them to use their handy POS to withdraw money on any spurious and unsubstantiated accusations.

All the above are now part of Nigeria’s history. The protests or agitations had subsided now, but not without leaving behind sorrow, tears, and blood all over the country. May the souls of the innocent boys and girls felled by the yet-to-be-known soldiers rest in perfect peace.

The solace of this piece, therefore, is not to open old wounds or unnecessary sentiments, but to tug at the springs of the heart of rulers or leaders in governments. The question now is –after the EndSARS imbroglio, what next? Permit me to make a positive digression to the masterpiece of the renowned author of ‘’ Animal Farm’’ –George Orwell. The popular novel written in 1943 is a satire and has been an interesting piece when analyzing the system of governments around the world; especially when we look at our country Nigeria which is neither a little to the right or left form of government (apology to IBB) A little extract from the novel will open our memory to what might have led to the EndSARS protest. In the novel, one of the major characters, ‘Old Major’, addresses his fellow animals saying: ‘Now Comrades, what is the nature of this life of Ours? Let us face it: Our lives are miserable, laborious, and short. We are born, we are given just so much food as will keep the breath in our bodies, and those of us who are capable of it are forced to work to the last atom of our strength…………’’ ‘’But simply, is this simply part of the order of nature’’? ‘’Is it because this land of ours is so poor that it cannot afford a decent life to those who dwell upon it’’? ‘’No, Comrades, thousand times No’’! The soil of England is fertile, its climate is good, and it is capable of affording food in abundance to an enormously greater number of animals than now inhabit it…. ‘’ Why then do we continue in this miserable condition? Because nearly the whole of the produce of our labour is stolen from us by human beings….’’ Not quite long after the Old Major’s long speech laden with emotions, either by divine intervention or human error and the lackadaisical attitude of –‘’ it doesn’t matter’’, ‘they will not talk,’ syndrome, those animals in the animal kingdom on the Manor Farm set themselves free to the amazement of their masters but not without the sour taste in the mouths of their Keepers just as it happened during the EndSARS protests. Some schools of thought are of the opinion that EndSARS protesters are not co-ordinated, but we should not deny the fact that they were focused until those brigands mixed with them. The original protesters were not out to topple the incumbent President but genuinely to register their disapproval on the way and manner their future is being mortgaged. It was bottled aggression (like that in George Orwell’s ‘’Animal Farm’’. And that is what happens when leaders in government take people for granted too long but prefer to use propaganda mouthpiece to persuade people to understand like ‘ Squealer’ (Animals PRO) Who comes out to dish out smooth speeches without the willingness to do what is meant to be on the part of the government- always deferring the evil days.

What this medium seeks to achieve is for the rulers to know that it is unprofitable to build fortresses to protect themselves- Isolation could be disastrous. The government must choose to COMMUNICATE as frequently as possible to the citizens and be pro-active –Do something promptly to cushion the effect of people’s plight and not merely talking; Isolating information from people cuts you off from valuable information or intelligence gathering and makes a government vulnerable to mutiny or attacks. The ministry of Information should work in tandem tenaciously with the National Orientation Agency (NOA) in all the states of the federation to educate, inform and disabuse the minds of mischief-makers. Radio jingles, television talk shows, youth meetings, community heads meetings market women, tete-a –tete, Artisans and the like, to bring government closer to the people. The NOA should not be like a masquerade that shows his face once a year. NOA should not wait until another general election before reorienting the populace on the pulse of the government to citizens. Feedback mechanism should be paramount as pointers to people’s expectations from the government and the government must yield to people’s yearnings and not playing the ostrich or making a change like a gentle improvement of the past. It has to be an aggressive change, a radical one that is very sustainable to the grassroots.

Whosoever is in the ivory tower, be it Federal, States or Local governments should shun the culture of ethnic jingoism. Nigeria is still ‘’One’’. Therefore, the six geo-political zones should be a midwife as three children of the same parents. None should be starved or discriminated against.

By Idowu Tunde –(To be continued)