Why Remaining Greenfield University Abducted Students Are Yet to Be Released 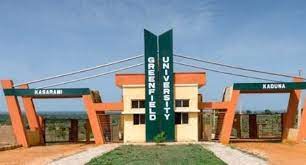 The controversial  Kaduna –based Islamic Scholar, Ahmad Gumi has disclosed why bandits are yet to release the remaining students of Greenfield University abducted about two months ago according to our source.

Gumi said the students have not been released owing to the bandit’s link with Boko-Haram.

It should be recalled that Bandits attacked the private University based in Kaduna state on April 17 and abducted twenty students. While some of the students were released, the bandits had killed five. However, Gumi said Boko-Haram has infiltrated the field of kidnapping.

Speaking with Channels Television, the Cleric said’’ The Greenfield abduction is unique because, for the first time, we witnessed cooperation between some bandits and Boko-Haram elements which confirms that Boko- Haram are encroaching into the field, which is a bad situation’’.

The Islamic Scholar said Boko-Haram had reached out to the abductors of hundreds of students of Government  Science College in Kankara, Kaduna state last year with an offer that the schoolboys be sold to them because they could bargain better for ransom.

Gumi said the bandits, however, rejected the offer and eventually released the students after negotiations.