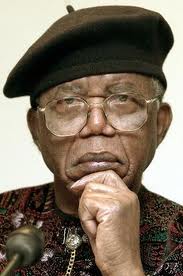 A former Senator , Shehu Sani  has revealed  what  Late  Chinua Achebe  told him , when he  asked  for the reason  he rejected  the Nigerian National  Honours Award before his demise.

In a tweet  he made on his  verified  Twitter handle,  the former Senator  who represented  Kaduna Central Senatorial  Zone, Shehu Sani ,  said  that he once  inquired from  Chinua Achebe  why  he rejected  the Nigerian National  Honours Award , his response  was to refer him  to read the content  of the letter  of his rejection , making  him to understand  that the letter  was  written  in English  and not  Mandarin or Greek.

Prof. Achebe  rejected the award  owing  to poverty, hunger and violence  in Nigeria as depicts in some of his works in literary studies . He rejected the award not because he did not deserve it  but because of his  love for Nigeria and Nigerians. He preferred  to humble himself  than being hypocritical  in the face of starvation  in the land. He could not pretend all was Eldorado.

Few Nigerians  have done what  this great literary Guru did? Titles and awards are now for sale and now at beck and call to the well connected!