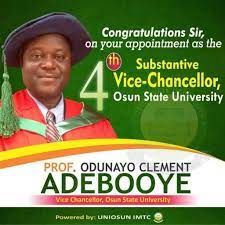 The Governing Council of the Osun State University, UNIOSUN, has appointed  Prof.  Odunayo Adebooye as the fourth substantive Vice-chancellor.

In a statement by the Public Relations Officer, Mr. Ademola Adesoji said that the Council, chaired by Yusuf Ali(SAN) chose  Adebooye as a result of the approval of the Visitor, Governor Adegboyega Oyetola.

‘’He is a professor of plant physiology with an academic career spanning 26 years during which he served the UNIOSUN  at various times as a member of the Governing Council, Deputy  Vice-Chancellor, Provost/Dean, Director and Head of Department, among others.