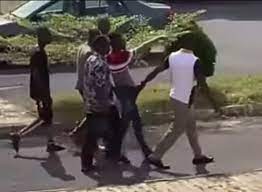 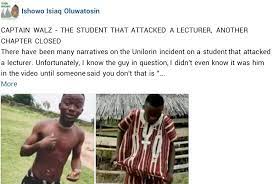 A 400 level student of the University of Ilorin, Department of Microbiology has been allegedly beaten a female lecturer who was his final year project supervisor to a coma.

Captain Walz,  as identified, an undergraduate student of UNILORIN was reportedly going to the lecturer’s office on Thursday, November 11, 2021, to seek her help because he failed to observe the compulsory students Industrial  Work Experience Scheme (SIWES).

The lecturer, Mrs. Zakariya, is the student‘s project supervisor and was said to have refused to help the student.

However, for refusing the student, Walz, reportedly became furious and assaulted the lecturer inflicting severe injury on her. Mrs. Zakariya was subsequently rushed to the hospital for treatment.

Confirming the incident, the university’s Director of Corporate Affairs, Mr. Kunle  Akogun told Daily Trust that the lecturer is now in a stable condition.

‘’Yes, the incident is true but the lecturer is now in a stable condition.

The VC, Prof. Abdulkareem visited her in the company of some Deans and other university staff.

They described the incident as unfortunate and sad and assured justice will be done on the matter’’., Akogun said. He added, that the VC of UNILORIN has ordered that the victim’s medical bill be footed by the institution.

The student, Salaudeen Waliu has since been expelled from the university.