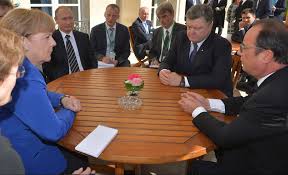 Turkey has positioned itself with great care to be the go-between with Russia and Ukraine, and this seems to be paying off.

On Thursday afternoon, President Vladimir Putin rang the Turkish President, Recep Tayyip Erdogan, and told him what Russia’s precise demands were for a peace deal with Ukraine.

Within half an hour of the ending of the phone call,  I interviewed Mr. Erdogan’s leading adviser and spokesman, Ibrahim Kalin. Mr. Kalin was part of the small group of officials who had listened in on the call.

The Russian demands fall into two categories.  The first four demands are,  according to Mr. Kalin, not too difficult for Ukraine to meet.

Chief among them is an acceptance by Ukraine that it should be neutral and should not apply to join NATO. Ukraine’s President Volodymyr Zelensky has already conceded this.

There are other demands in this category that mostly seem to be face-saving elements for the Russian side.

Ukraine would have to undergo a disarmament process to ensure it wasn’t a threat to Russia.  There would have to be protection for the Russian language in Ukraine. And there is something called de-Nazification.

This is deeply offensive to Mr. Zelensky, who is himself Jewish and whose relatives died in the Holocaust, but the Turkish side believes it will be easy enough for  Mr. Zelensky to accept.

Perhaps, it will be enough for Ukraine to condemn all forms of neo-Nazism and promise to clamp down on them.

The second category is where the difficulty will lie, and in his phone call, Mr. Putin said that it would need face-to-face negotiations between him and President Zelensky before an agreement could be reached on these points.

Mr. Zelensky has already said he’s prepared to meet the Russian president and negotiate with him one-to-one.

Mr. Kalin was much less specific about these issues, saying simply that they involved the status of Donbas, in eastern Ukraine, parts of which have already broken away from Ukraine, and stressed their Russianness, and the status of crimes.

Although Mr. Kalin didn’t go into detail, the assumption is that Russia will demand that the Ukrainian government should give up territory in eastern Ukraine. That will be deeply contentious.

The assumption is that Russia will demand that Ukraine should formally accept that Crimea, which  Russia illegally annexed in 2014, does indeed now belong to Russia. If this is the case, it will be a bitter pill for Ukraine to swallow.

Nevertheless, it is a fait accompli, even though  Russia has no legal right to own Crimea and actually signed an international treaty, after the fall of Communism but before  Vladimir Putin came to power, accepting that Crimea was part of Ukraine.

Ibrahim Kalin was one of the few people to listen in on the phone call between Russia and Turkey’s leaders.

Still, President Putin’s demands are not as harsh as some people feared and they scarcely seem to be worth all the violence, bloodshed, and destruction which Russia has visited on Ukraine.

Given his heavy-handed control over Russian media, it shouldn’t be too hard for him and his acolytes to present all these as a major victory.

For Ukraine, though, there are going to be serious anxieties. If the fine details of any agreement aren’t sorted out with immense care, President Putin or his successors could always use them as an excuse to invade Ukraine again.

A peace deal could take a long time to sort out, even if a ceasefire stops the bloodshed in the meantime.

Ukraine has suffered appallingly over the past few weeks, and rebuilding the towns and cities which Russia has damaged and destroyed will take a long time. So will re-housing the millions of refugees who have fled their homes.

What about Vladimir Putin himself? There have been suggestions that he is ill, or possibly even mentally unbalanced. Did Mr. Kalin detect anything strange about him in the phone call? Not at all, he said. Mr. Putin had apparently been clear and concise in everything he said.

Yet, even if he does manage to present an agreement with Ukraine as a glorious victory over neo-Nazism, his position at home must be weakened.

More and more people will realize that he overreached himself badly, and stories of the soldiers who have been killed or captured are already spreading fast.