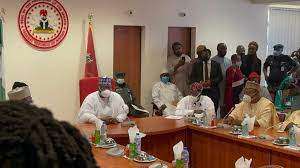 Bola Ahmed Tinubu has secured the full support of the APC Senate Caucus in his 2023 presidential ambition.

The former Lagos State Governor was promised a strong backing of the APC federal lawmakers on Wednesday, March 16. Senate President Ahmad Lawan told the Tinubu this and wished him well in his endeavour.

This was in response to Tinubu’s call for support when he had a meeting with members of the red chambers who belong to the ruling party.

‘’Your Excellency, once again, all of us wish you well, wish you the best of luck, wish you success in this and in the affairs  of fighting  for APC, to continue to be the ruling party in Nigeria, and justifiably  so, Your Excellency, we are with you.’’ Senate President Ahmad Lawan told the presidential aspirant.