Tinubu, Osinbajo may be ‘Dished’ by APC IN 2023- Deji Adeyanju 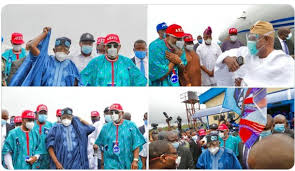 The Convener of Concerned  Nigerian Movement, Deji Adeyanju has revealed that the ruling  All Progressives Congress(APC)  will shock the duo of Bola Ahmed Tinubu and the Vice-President Yemi Osinbajo come 2023 because the powerful cabal in the Presidency and in the party have different agendas on zoning.

The activist said that the party’s presidential ticket may not go to the South-West, but to a candidate from the South-South.

Adeyanju, who posted a picture of the Minister of Transportation, Rotimi Amaechi, and the Governor of the Central Bank of Nigeria, Godwin  Emefiele, said  APC is considering picking its presidential ticket from the Igbo zone.

The activist further stated sources in the ruling party(APC) informed him that the camp of the party leader Bola Tinubu and the Vice-President, Yemi Osinbajo will be denied the party’s ticket.

According to Adeyanju, the camp of the former Governor of Lagos and Osinbajo will weep over the decision of the APC.

He added that former president,  Goodluck Jonathan has more chances of getting an APC ticket ahead of Tinubu..

He wrote, ‘’APC presidential ticket is likely to go to the South-South and the advantage both have is that they are considered to be Igbo men’’.

‘’South West will not get it according to many sources in APC. They are going to show Tinubu pepper in APC. Goodluck  Jonathan has  more chances of getting an APC  ticket  than him,’’ he added