SARAFA-YUSUF to Contest for Governorship in Ogun 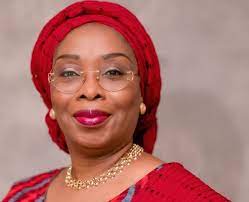 Says, ‘I will run an all-inclusive government’

According to The Nation Newspaper, Mrs. Modele- Sarafa-Yusuf, the former Special Adviser to Ogun State Governor Abiodun on Information, has declared her intention to run for governor seat in Ogun State.

Mrs. Modele pledged to serve the State well and be a transformative leader.

Mrs. Sarafa- Yusuf, a member of Governor Abiodun’s media campaign team in the build-up to the 2019 governorship election, said if given the mandate, would provide an enabling environment that would unleash the creative potential of youths, empower women and revitalize the economy.

The famous Sports presenter and analyst spoke yesterday  while fielding questions  from  reporters at Osoba  Adire Kampala International Market, Asero, Abeokuta, shortly  after declaring  her intention  to run for the governor on the platform  of the All Progressives Congress(APC)

Shcounseled the electorates to be wary of politicians who come to them during the electioneering period, as the nation approaches another election year, only for such politicians to disappear after they have been given the mandate.

The ex-aide to Abiodun said, she would run an inclusive government if given the opportunity to serve.