The Press in a Democracy 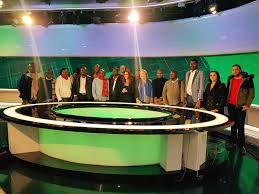 The role of the Press in a democratic setup cannot be over-emphasized. The Press is the watchdog of society. It is usual to refer to the press as the fourth estate of the realm.

The history of the press in Nigeria shows that it played a vital role in ensuring independence. It also articulated the rights of the people even under the colonial yoke. Ronald Frank Storette underscored the role of the press  and the need for the press to be free when he wrote thus:

…….the institution of a free press, a press that is independent and free of censorship-is an essential element of (a) free state and modern democracy,.. the major values underlying the freedom of the press or of speech are the society’s deed for the maximum flow of information and opinion, and the individual’s right of fulfillment. Therefore, the degree of liberty a people have in speaking, writing, and publishing determines how free people are. Secondly, it is held that it is the function and indeed, the duty of the press to keep the citizens of a country informed of the different opinions which are being expressed, so that the citizens can make the political decisions that a democracy demands of them. Only through widespread discussion, freely engaged in through the press, wherein the pro and cons of every important question of the people are articulated and discussed, will it become possible to distinguish the precise points of an argument, which in turn, will facilitate the necessary conclusion’’

The idea of freedom of expression which entails freedom of speech and of the press has been universally recognized. Article 19 of the Universal Declaration of Human  Rights states thus:

‘’Everyone has the right to freedom of opinion and expression. The right includes freedom to

hold opinion without interference and to seek, receive  and impart information and ideas

through any media and regardless of frontiers.’’

The 199 Constitution recognizes freedom of expression and the press. Section 39(1) of this constitution

‘’ Every person shall be entitled to freedom of expression, including the freedom to hold opinions

And to receive and impart ideas and information without interference.’’

Democracy in its modern connotation refers to participatory democracy, by which the people, through their elected representatives take part in governance. The nature of democracy requires that people should be well informed about how they are governed. The press has been recognized as an institution that is saddled with the responsibility of informing the public about matters of general or public importance.

“….a free press is one of the pillars of freedom in this country as indeed in any democratic society.’’

Happily, the constitution assures the confidentiality of the information disclosed to the press. This can be found in section 39(3) (a)  of the 1999 constitution. Ademola Johnson Ag.  L.J. put it succinctly when he said in Tony Momo v. Senate of the National Assembly & Ors. (1981)I NCLR.105 that:

Much as it could be asserted that freedom of speech and of the press is guaranteed, it must not be forgotten that the press must operate within the confines of the law. Section 45(1) of the 1999 Constitution. It states thus:

‘’Nothing in section 37,38,39,40 and 41 of this Constitution shall invalidate any law that is reasonably justifiable in a democratic society.’’

Denning M.R. maintained the balance when he said in British Steel Corporation Vs Granada Television Ltd. (1981) 1 All ER 417 at 441 that:

‘’In order to be deserving of freedom, the press must show itself worthy of it. A free press must be a responsible press. The power of the press is great. It must not abuse its power. If a  newspaper should act irresponsibly, then it forfeits its claim to protect its sources of information.’’