THE JOURNEY OF NO RETURN 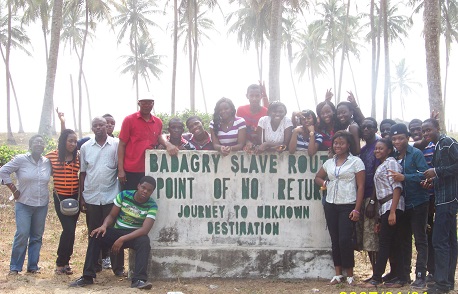 Over two hundred years ago, millions of our ancestors were slaves.  What does it means to be slaves? A slave is at the mercies of his master. He or she is the property of his master just as when somebody rears a goat and at liberty to do whatever pleases him to the goat. He can kill the goat, resell it or chained it on a spot for whatsoever he cares to do with it.  The goat cannot complain.

That was what happened to human beings like you and me, men, women, boys, girls in the past. Slaves could be flogged sold, or even killed if they made their masters angry!

Slavery is against the law of humanity and anyone who tries to buy or sell a human being, if caught, should be severely punished according to law. The erroneous belief is that slave trade began when the Europeans came to Africa. This is not so. Slave trade already was thriving before their arrival on the shores of Africa.  In ancient Egypt,-one of the oldest countries in the world- gangs of slaves were used for building large houses and monuments. In Africa, people fought wars and those who won the wars often captured those who lost and took them as slaves. Often those prisoners became domestic slaves, used to work in the house or the farms of their owners.

The Europeans who wanted the slaves did not capture them by themselves. They left the Africans to find and capture them The Europeans bought them from the Africans. Whenever there was a war between two tribes, those that were not killed were taken as slaves. Also, when a man owed or indebted to somebody and could not pay, he was sometimes taken as a slave Whenever slaves were captured, they were sold at slaves markets near the coast in Lagos and in Badagry, for example, there were very big slaves markets where the local chiefs became very rich because they could force the European traders to pay taxes in that illegal and inhuman business.

The curiosity and the horror which this story generates gave the impetus to our journey to one of the ancient slave depots in Nigeria, in Badagry, Lagos state.

We took off from Lagos Island as early as 9.am. It was a tortuous journey because of the ever busy road with chains of traffics.

The ‘’barracuda’’ (Brazilian word for prison), where slaves were kept for 3 months before transported to their final destinations in Europe was our first port of call.  The cells were small or narrow. A particular cell looked suffocating and housed about 40 adult villagers: information had it that children were sometimes given as a bonus!!

King Mobee’s grave –where the ancient chains for captured slaves were preserved was also visited. There were and pictures in the compound depicting the ordeals those slaves went through-it was too pathetic. King Mobee himself, according to the tour guide was a slave dealer.

We got to the mystic Well, where captured slaves would be forced to recite some incantations in order to forget their roots after drinking form the well.  The experience was terrific. We were shown the road tto Sierra-Leone by the tour guide enroute’ the- point- of –no-return’ where slaves were finally shipped to Europe.

Bitter sweet was that trip. Despite the trekking done to sight these historic  sites, we had the opportunity to have seen the first storey building in Nigeria, the  first  English Bible and the first Yoruba translation of it by Rev. Samuel Ajayi Crowther(an Anlican Bishop and a freed slave from Osogun town in Oyo state)

It was a point of no return for some slaves but we had the opportunity to return to tell the story.

One thing is sure, slavery is bad and inhuman. Thanks to Wilberforce and his team who enacted a law in the British parliament for its stoppage in Europe. That culminated in other countries in Africa followed suit. If slavery has been abolished all over the world, those who still practised human trafficking are slaves dealers and should not be left off the hook when caught.

EXIT A SOCCER STAR-PELE OF BRAZIL