The Agony of A Prodigal Woman on Booze 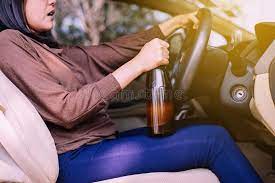 She stared at her filled glass for a long time and wondered about the place of alcohol in her life. She started this crazy lifestyle right from her secondary school days, continued up to the time she graduated from the University, and eventually got hooked to a notorious Cassanova. She pondered on the soothing course of cold beer down her throat. The Benson and Hedges cigarette servicing her like a locomotive engine across the tunnel in a shantytown without a pause and the general excitement she felt with her fifth bottle and the euphoria that accompanied the sixth one.

‘’Booze was marvelous’’, she mused, ‘’always putting you on top gear’’. But did it provide the emotional succor that she needed desperately? The following day it was a hang-over. She would feel terrible torment in her inner mind, condemning herself of her lifestyle which she would feel she could not help but continue. Then she would be ready again for another drinking spree the next day.

It was becoming a cycle gradually. Yet, the problem remained unsolved. The husband had been turned to a houseboy- he cooked, cleaned the bedroom and the sitting room after her mess of vomit all over the place. He could not complain much for he wanted her badly before they married because of her irresistible beauty.

On a fateful day, which, incidentally, was her wedding anniversary, she had a sober mood and first thought to stay at home with her ‘nanny’-husband and the two kids of the family and, perhaps, this would make her mood better that day and eventually bail her out of the drinking agony.

She refused the decision of the heart and off she left for her usual joint. As her mind drifted back to her emotional wretchedness when on the second bottle of Stout beer, she felt tears beginning to burn her big but dazzling eyeballs and trickle down her cheeks. Quickly, she reached for her handkerchief and, not wanting the occupants to know her predicament and not to reduce her social ‘status as a big-time customer in the pub, she mopped the betraying liquid away. God! How could I  cry like that in a public arena? She looked through to assure herself nobody was looking and she saw a virtually empty beer parlour. The hotel attendant was engrossed in attending to his business and the kitchen lady was busy preparing the roasted chicken for the next hour.

Her two kids had been wondering whether she was their mother because of the estrangement and lackadaisical attitude with them. She hardly stayed at home. They saw her only in the morning before she went to work in her flashy car, not minding, even to drop the kids in their private schools, some kilometers away. After all, the ‘nanny ‘ husband would do it without complaining –a price he is being paid for choosing ungodly educated beauty as a wife.

She returned home very late in the evening when the kids were already in bed. Everybody in the street thought she was a banker or a doctor, always on-call or night duties, unaware that she was a big-time receptionist in one of the manufacturing companies in the heart of Lagos. She was neither placed on shift duty nor working overtime but took time off to lay-about as a lifestyle in the company of the ‘senior girls’ like her in the city.

She began to evaluate her husband.’’ Yes, he was the cause of all these after all. Bode tricked me to marry him. He lavished money on me and made me live a high-class life during our courtship that we have vowed to continue after we got married’’. She recollected with vivid nostalgia how Bode would give her money for booze and cigarettes when she informed him of her thirst for pepper soup.

‘’Yes, he encouraged me to live the high-class lifestyle to my own detriment, and now  I found it difficult to break from the grip of this bad habit. He once told me that some of his cousins in London, the USA who were of the same stuff before their wedding with their spouses, were enjoying their marital lives overseas, not knowing that we were building on delusions’’.

Frankly speaking, initially, her marriage with Bode was very blissful at least, the initial six months! But, as time went on, she was engrossed in this bad habit and before their first child, boozing was their pastime each time she stayed at home with Bode or went out with him to his many joints. She guessed that her husband’s decision to stop boozing came about when he saw that they had been deserted by close friends and relatives. His resignation from their normal ways of life (smoking and drinking alcohol) came to her like a bolt from the blue and she began to abhor him. For him, it was more than that. He felt humiliated to have suddenly turned a cleaner each time the wife went on booze and vomited. He was responsible for clearing her stench each night she returned from her nocturnal merry-go-round.

Then, it happened! She had followed her office colleagues to a carnival in one of the three-star hotels in Ikeja where she found herself thrown amidst some high-class‘ society women’ and straight in the jaws of misery masquerading as pleasure. As the night progressed, the camaraderie had been infectious and she found herself on the lap of a guy sharing party jokes with them while they were laughing at the return jokes and enjoying one another’s company.

When it was getting to dawn, Ben, a gap-toothed guy, who had been housing her on his lap, was an undergraduate student of one of the Universities in the Northern part of the country. He had been the one supplying the ‘Senior girls’ with concentrated jokes. Ever since he noticed the special liking Bola(for that was her name)had for him. He politely, in a gentle and captivating voice asked for a ride if she would go en-route Yaba in Lagos when she decided to leave the party. Bola, the mother of two, quickly obliged, and of they went in her flashy car, not without the agreement that he (Ben) should drive her to her house first at Surulere, and that she would arrange for how he would get back to Yaba later in the day.

She was already drunk and tipsy. Straight to the heart, Ben concurred, and having noticed the drunken state of his ‘night companion’, he quietly stopped the car engine a few meters to Surulere , dropped her beside the road, still tipsy.

While the guy sped, she could not shout, neither could she walk straight but managed to trudge down to a nearby stall and slept off till mid-day when a lunatic residing in the stall woke her up with a shout at her to vacate his colony.

Opening her eyes, she jumped up, not knowing where she was or what brought her there; she took to her heels, not knowing where she was heading to. It dawned on her after a few minutes that she was alone and her car was gone, but to whom? The answer, to her, remained a misery. She could not just fix it. She became sober, weeping profusely, not only because of her stolen car but her humiliating and derogatory condition of living. She was downcast and decided on the spot to find her way back home to appeal to her husband to forgive her like the proverbial prodigal son.

That of her kid? She vowed to take care of them and be closer to them. She also swore on oath to her husband to do away with alcohol, let alone to talk of being a hoodoo. Yes, she echoed, to do this is one fine example, of the inevitable ‘prizes’ –sometimes fatal that almost invariably becomes one’s lot when one does not heed the dictates of one’s heart and hence become indicative and vacillating over the affairs of the heart.