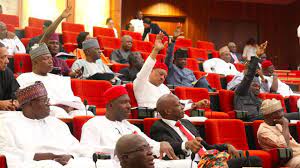 A proposal for Sharia Law has been received by the Senate from a group known as The Muslim  Congress(TMC) to introduce and implement Sharia law in the South- Western States of Nigeria.

The hearings organized by the Senate across the six geo-political zones in the country is aimed at getting suggestions from the public so that it could review and amend the 1999 constitution where necessary.

Speaking at the hearing, the TMC representative Abdul Ganiyu Bamidele said they want Sharia implemented in the Yoruba-speaking South-West to cater for its Muslim counterparts.

‘’ We want to partner for the creation of Sharia Courts in the South-West because of our population as Muslims’’, Bamidele added.

The call has since generated so much backlash on social media with many Nigerians vowing to vehemently resist it if ever implemented in the South-Western State of Nigeria.