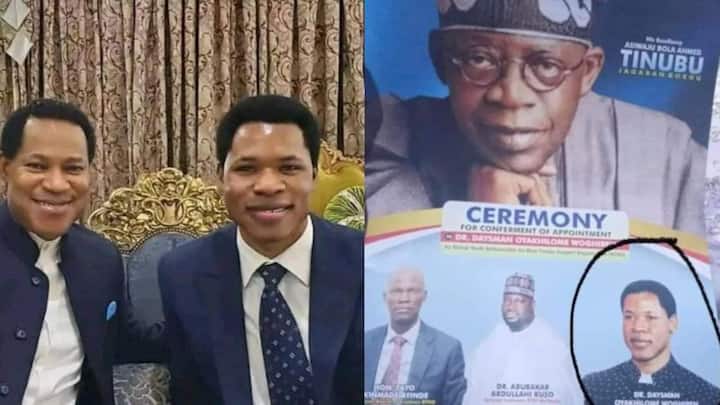 Daysman Oyakhilome Woghiren of Christ Embassy. Ministry,a NEPHEW of Pastor Chris Oyakhilome has been suspended from his position as the President of Loveworld Next and Loveworld Innovations.

There have been widely spread speculations that Woghiren’s suspension may not be unconnected with his ‘romance’ with the presidential candidate of  the All Progressives Congress (APC),Bola Tinubu.

Pastor Oyakhilome was Quito to have said in a video:

This man ,Oyakhilome Woghiren, is. hereby removed from being President of  Loveworld Next and Loveworld Innovations and also suspended from all official roles for acts of gross misconducts. So, he no longer handles all that”.

“I am putting him under spiritual rehabilitation programme from now with immediate effect”.

A flier had shown  Tinubu and the younger Oyakhilome  with other APC officials in what looked like  an endorsement.

Oyakhilome,58,is not known to be an active participant or discussant or analyst in Nigeria’s political commentary.

Similarly,sources in Christ Embassy Ministry, have denied that the recent suspension of Daysman  Oyakhilome Woghiren was connected to his association with the presidential candidate of the All Progressives Congress(APC) in the 2023 election,Bola Ahmed Tinubu.

The Founder if the Church,Pastor. Chris Oyakhilome on Sunday ,August 7, announced the suspension of his Nephew, Woghiren,from his position as the President of  Loveworld Next and Loveworld Innovations branches of  Christ Embassy.

Oyakhilome made this pronouncement during a  Global Praise Night Programme of the church on Sunday ,that  his suspended Nephew would undergo a  spiritual rehabilitation.

The preacher first quoted Proverbs 19:18, saying”Chasten  thy son while there is hope and let not thy soul spare his crying”.

“Don’say  that because some people are doing it then you start doing it too and misbehaving” ,he added.

However, sources within  Christ Embassy Church   hierarchy  insisted that Woghiren’s suspension had nothing to do with the campaign  flier  with his picture along  that of the APC Chieftains, suggesting that he is part of  Tinubu’s team.

“No.The removal of his Nephew was not related   to To ubu  ad Bei g suggested in some quarters”, one of the church sources said.

“It had to do with an accumulation of misconduct  on he part of Woghiren,” another source said.