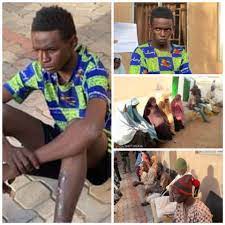 The Zamfara State Police Command has arrested a 20-year –old notorious bandit who specialized in kidnapping, banditry, cattle rustling, and other heinous crimes in Shinkafi, Zurmi, and Birnin Magaji Local Government Areas of the State.

The bandit, Sani Mati a.k.a.  Mai- Yanmata, was a member of a notorious bandit kingpin, Turji, but now operating under another gang of bandits known as Kahala Sani Black.

Kachala Black is a notorious bandit terrorizing communities and commuters in Nothern Zamfara.

Addressing newsmen on Wednesday, December 29, the Commissioner of Police in the State, CP Ayuba Elkanah, said the bandit was arrested while trying to block a highway around a community called Koliya with intent to unleash mayhem on commuters and abduct innocent citizens.

‘’On the 28th December 2021, at about  0500hours, Police tactical  Operatives deployed along Zurmi axis while on confidence-building patrol acted on intelligence information that led to the arrest of the suspect.