Osun 30th Anniversary Colloquium :Osun is now Better than how it was at Creation Ooniof Ife

The theme of the   30th Anniversary Colloquium- Celebrating a Milestone; Building a Prosperous Future

Making his remarks at the Colloquium, the Ooni of Ife, His Royal Highness Oba Adeyeye  Enitan Ogunwusi, the Ojaja11 eulogised the efforts of the past and present leaders in the State. 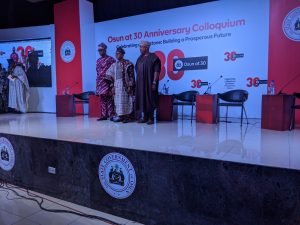 According to him, Osun State is better today than the way it was when it was created.

‘’ Osun is better today than it was when it was created. What we are having here today attests to the fact.  The journey of 30 years began with some people’s efforts and we appreciate the founding fathers, past Administrators and the incumbent governor for their contributions to the growth and development of Osun State..

The Ooni of Ife added that Osun State is greater than a single individual and so, it is necessary to stress the fact for our people to be wary not to allow politics and other interests to disintegrate us’’. ‘’We should bring everybody together’’.

The chairman of the occasion, His Highness the Sultan of Sokoto, Muhammadu Abubakar 111, despite his exigency of duties delivered his inspiring speech via the zoom platform. 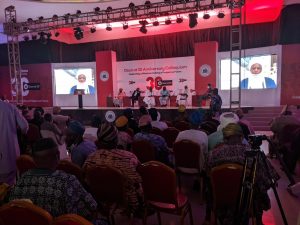 The Sultan said,’’ the achievements of Osun State within the period of creation is the one that humbles other older States. ‘’It was no surprise that in Osun’s 30 years of existence, it had produced a galaxy of stars in all sectors and areas of human endeavours. ‘’The State is endowed with both human and natural resources, he added’’.

The Sultan sang praises of Governor Oyetola who he described as a gentleman governor, man of peace, of honour, a stateman a bridgebuilder and a lover of development.’’. The Sultan also described Oyetola as a believer in one strong and indivisible Nigeria’’.

‘’ I have followed the programme of Oyetola closely since assumption of office. He’s a deep thinker and silent reformer and performer; he came into the government with Development Agenda hinged on adequate, quality and equitable service in all sectors. He has also introduced people-oriented policies based on inclusive governance and sustainable development’’.

Former Administrators of the State, General Leo Aibrisha(rtd.), captain Anthony Udofia(rtd), Theophilus Bamigboye and Bisi Akande rejoiced with the government and people of Osun State on the august occasion of the 30th Anniversary and enjoined all and sundry to continue to sacrifice for the growth and development of the State.

Chief Bisi Akande lauded the founding fathers of the State and described them as ‘’achieving an optimum community, who have laid the foundation for the prosperous future of Osun State’’.

In his own inspiring speech,  the speaker of the Osun State House of Assembly commended the efforts of the past leaders in the State and the incumbent governor Oyetola. According to Owoeye, ‘’we are celebrating the growth and development of the State. Apart from celebrating Osun, we are celebrating you(Oyetola)  to show those who feel you’ll find it difficult to govern Osun, but now there is peace in Osun State. 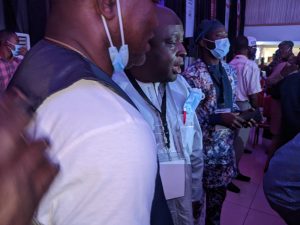 Otitoju remarked that’’ there is no State in Nigeria that can boast of as many urban centres as Osun. He lauded the past and present Administrators in the State since the birth of Osun State adding that  Osun has undergone a geometric progression. According to him, ‘’what is required is the need to focus on developing those urban centres to reduce the exodus to the cities. Once this is done, the migration we see from these centres to cities like Lagos will reduce drastically.

The Group Head of the current and Public Affairs of TVC, Otitoju said’’ Population is an ingredient of growth and development. What that implies is that the development of those urban centres will help retain citizens and ensure the return of those who have migrated already. Businesses will grow and Osun will remain on top in the country. He commended the Governor of Osu State, Alhaji Adegboyega Oyetola. He said,’’ people have described him as a gentleman governor, but I will describe him as a positively gentle governor because he is gentle in a way that brings growth and development’’.’’ But here is my submission to the governor, let’s build more inner roads. I know resources are limited but you have already done the unthinkable with the limited resources. Some of us didn’t expect what you have done except we want to lie. We thought it will be more difficult; we know the resources are limited, but let us do our best, he added. 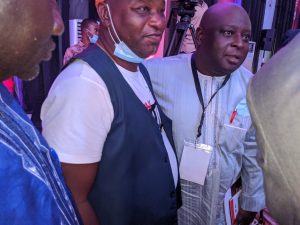 Making his remarks,  Governor Oyetola said,’’ This colloquium has been designed as the intellectual arm of the 30th anniversary of our State to interrogate the performances of the State, so far, examine possible gaps and projects for a sustainable future that we all crave for as a people and desire to bequeath to our posterity. 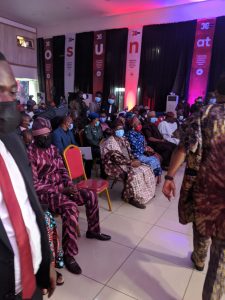 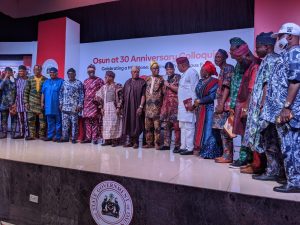 ‘’As an Administrator, we have instituted this colloquium to celebrate our shared values and our collective resolve that have delivered the Osun that we desire and to give vent to our dream to prosecute our Development Agenda which is our strategy and road map to put our dear State on the path of sustainable development.

‘’We are confident that just as the foundation laid by our forefathers 30 years ago have earned us a viable place in the national and international space, our decision to lay bricks of contemporary governance and structures will build a prosperous and sustainable governance and development; the beginning of a new era for a generation of Osun citizens that will ride on the wings of knowledge, technology and entrepreneurship to realize their potential, shut the door against unemployment, create wealth and radically transform the economy of the State.’’. 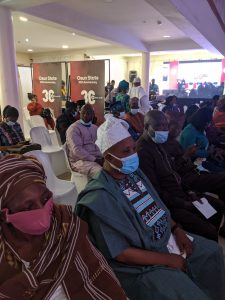 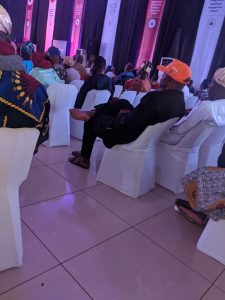 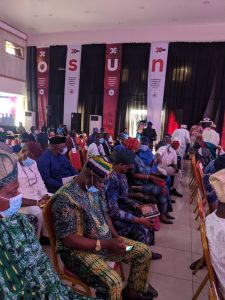 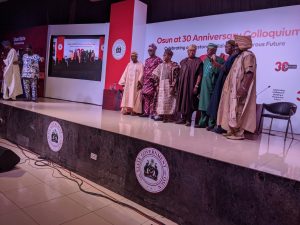 Our distinguished royal fathers include the Ooni of Ife, His Highness Ogunwusi, the Ojaja 11, the Orangun of Ila-Orangun, Oba Oyedokun, the Ouwo of Iwo and many more royal fathers. 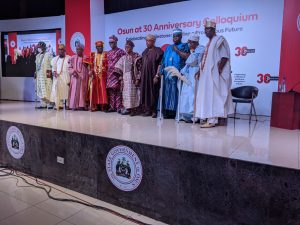 The colloquium was streamed live on various social media: Facebook, zoom, U-tube, WhatSAAP, with over 5.000 participants across the globe.