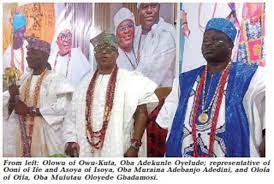 It was a day of joy in Apomu town in Osun State on Wednesday as eminent Nigerians converged at the palace of Alapomu of Apomu, Osun State to grace the occasion of the 2nd year Anniversary on the throne of his forefathers. 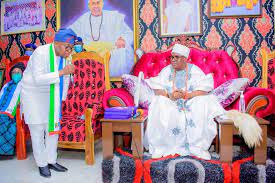 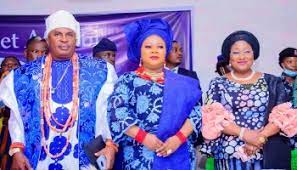 In his speech, Governor Oyetola represented by the secretary to the State government(SSG) Mr Oluwole Oyebamiji, said his administration would always the progress of the town.

Oyetola said,’’ The gains of this are emerging in the improved socioeconomic development of Apomu and the peaceful co-existence that exists among the people.

‘’I note particularly how Kabiyesi has continued to deploy his rich experience and network for the service of not only Apomu but also the State and humanity in general.

The fact that the second coronation anniversary is being commemorated with a colloquium documentary, and a book presentation, in honour of Kabiyesi, is a testament to the quality of thinking, available in the daily exercise of the business of administering the kingdom.

The Alaafin of Oyo, Adeyemi, said, ‘’I have been working abroad before I  became the Alaafin of Oyo; Kabiyesi,  may you live long. I greet  Olofin, Olokuta and other traditional rulers here present.  I thank God for the privilege  bestowed  on me to be  with you.’’

Adeyemi who prayed for Alapomu said,’’ Your being with him should be cordial, kindly accep[t  him as your traditional ruler. Don’t embarrass him and I am assuring you that he will be calling regular meetings which we are going to be honouring to pray for him’’.

‘’Adenekan, you will not die young and you won’t get sick. I implore all the traditional rulers to trace and know their origins, customs and traditions.

Earlier, the Alapomu of Apomu, Afolabi, said, he had made it a point of duty to base his judgement on fairness, equity and justice without any justification from anybody wherever the need arises.

He said that God has helped him in just two years on the throne as his reign had witnessed unprecedented achievements.

Reviewing the book, authored by Olori Janet Afolabi with the title: ‘’The Masters Who Trained Me’’, the General Manager/Editor-in-Chief of Vanguard  Newspaper, Mr Gbenga Adefaye, said it was a vital gift that should last till eternity.

He said, ‘’Olori Janet Afpolabi could be regarded as a famous journalist and not just a journalist but an award-winning journalist who won local and continental awards.

He said’’’’Olori Afolabi set out to acknowledge how to come about what she became. She thought the best way to do it was to remember those people who are very familiar with, who took her on the journey of learning to become a master and successful journalist.

The book is a book of tributes of acknowledgement of excellence of the work of the most famous  Ray Ekpu, Dan Agbese, Dare Babarinsa, Nosa Igiebor, Yakubu  Mohammed and Soji  Akinrinade who is in this hall. Soji Akinrinade is the one they call the General in the journalism profession.

‘’These were the mentors of Olori Janet Afolabi. They trained, tutored and guided  her till she decided that their efforts deserve to be documented for posterity’’.

In his paper,  the head of the Department of History, University of Ibadan, Prof. Olutayo Adesina advocated the need for training and teaching kindness in the homes.