No Victor , No Vanquished- Adeleke reacts 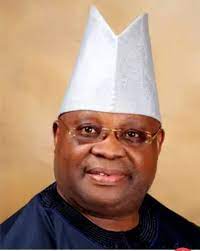 The Peoples Democratic  Party(PDP)  candidate for the Osun governorship election, Senator Ademola  Nurudeen Adeleke has urged party members to work together to rescue the people of Osun State.

The Senator and governorship aspirant under the umbrella of PDP made this call on Tuesday when he was reacting to his victorious emergence as the PDP  candidate for Osun 2022 governorship election.

‘’Salaries are not being paid as and when due. Our roads are in a terrible state of disrepair. No portable water. Many  of our communities  are in darkness because of lack of electricity, no employment  for graduates, nonconducive environment  for self-employment.’’

‘’I call on everyone to work together with the good people of Osun State and by the grace of God, PDP will win on the 16 of July 2022. Our manifestos will be released in a few days’’.