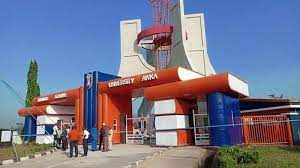 Two students of the Nnamdi Azikiwe University, Awka, on Sunday evening were found dead at a private hostel in the school.

A source at the institution said the hostel room located at William’s Lodge was forced opened following a stench oozing from it.

According to the source, the two students, a male, and a female might have died some days ago, because their corpses have started decomposing at the time they were retrieved.  The cause of the death  was not clear as of the time of filing this report.

It was gathered that the parents of the female student, whose name was given simply as  Adaeze, had been calling her telephone line for days without a response.

The source said when several calls were not responded to, the parents, became agitated and reported to the police.

The parents, in company with security operatives, stormed the hostel to check on her and they met her door firmly locked.

‘’On forcing the door opened,  they found the two students lying dead in the room.

The  Anambra State police spokesman, Ikenga Tochukwu confirmed the incident but debunked the claim of stench oozing from the room.

‘’The narrative is not correct. There was no stench. The girl was not answering calls, which got her parents worried. They reported to the police who forced the door opened ‘’.

‘’No mark of violence on the bodies. They died apparently from Carbon Monoxide poisoning from generator fumes.

The generating set was found in an enclosure facing the room.

The cause of the death will be ascertained after autopsy’’, he said.