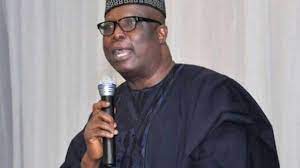 The Special Adviser to the President on Political Matters, Babafemi Ojudu, has voiced out that his decision not to support the presidential bid of the former Lagos State Governor, Bola Ahmed Tinubu should not be interpreted as a betrayal.

This statement was posted to his Facebook Page on Tuesday morning. Mr. Ojodu said, although he and the former Lagos State Governor, Tinubu had been a long-time associate, supporting  Tinubu ‘s presidential bid does not agree with his conscience and ideals. The duo of Ojudu and Tinubu have been relating closely since the early 1990s.

While Ojudu is a journalist, Tinubu is a politician who had won the election to become a Senator in the Nigerian Senate.

Reports revealed that the former Lagos State Governor even invested in TheNes Magazine, an influential and widely read publication owned by Ojudu and his colleagues.

However, in 2016, President  Muhammadu Buhari appointed Ojudu, a former senator, his adviser on political matters, and detail him to work with  VP Yemi Osinbajo.

Although  Tinubu was largely instrumental to Mr. Osinbajo ‘s emergence as VP, he soon fell out with him and the two have remained politically estranged.

Ojudu, however, seems to have taken sides with Mr. Osinbajo whose presidential ambition he is now promoting.

In his Tuesday statement, the former senator said he was being threatened while his family members were being embarrassed owing to his political differences with Mr. Tinubu.

‘’Let no one think he can browbeat or blackmail me to do what does not go with my conscience or my ideals,’’ Mr. Ojudu said. ‘’Enough of your phone threats and embarrassment of my family members’’.

‘’I know Tinubu. I respect and adore him. Many of his latter-day supporters do not even know him. If they do, they won’t resort to emotional and physical blackmail.

When Tinubu decided t go against  Afenifere and the Yoruba elders in 2023  by not supporting  President  Olusegun Obasanjo, he wasn’t betraying the  Yoruba nation or a traitor to Afenifere.

‘’He made a choice and history  has been his judge. Let history be my own judge too. When he supported Chief Olu Falae against Chief Bola Ige, our respected leader, who fought  for him to emerge  as the candidate  of Alliance  for Democracy in Lagos, no one  shouted betrayal.’’

‘’For the irritants who have been sending threatening messages to me and members of my family or calling to abuse me for not supporting  Tinubu, do not know that is not democracy. It is something else.

I spent my youth years fighting autocracy and intolerance of the military and I am still willing and ready, even now, to stand up for what I believe, even if it will cost me my life. Enough said.’’

EFCC INVATION ON SENATOR OKOROCHA’S RESIDENCE: Lays on the floor , begs for Help